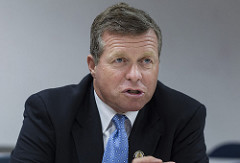 Seven-term Republican Rep. Charlie Dent of Pennsylvania, an opponent of internet gambling, recently announced he will not seek an eighth term. Dent, co-chair of the Tuesday Group of center-right Republicans, co-sponsored legislation to ban internet gambling in 2015. Dent told local media, “I don’t want to be one of those folks who has been here too long.” The declaration came a few days after state Rep. Justin Simmons announced a primary challenge to Dent.

Dent’s resignation appears to be the result of frustration over President Donald Trump and the party’s current direction. “As a member of the governing wing of the Republican Party, I’ve worked to instill stability, certainty and predictability in Washington. I’ve fought to fulfill the basic functions of government, like keeping the lights on and preventing default. Regrettably, that has not been easy given the disruptive outside influences that profit from increased polarization and ideological rigidity that leads to dysfunction, disorder and chaos. Accomplishing the most basic fundamental tasks of governance is becoming far too difficult,” he said.

Dent attempted to attach Restoring America’s Wire Act language into an appropriations bill this summer. The act seeks to reverse a 2011 Justice Department decision to reassess its prior position that the 1961 Wire Act prohibited online gambling. As a result, states now have the right to decide individually to legalize internet gambling or not. To date, New Jersey, Nevada and Delaware have done that. This year, Pennsylvania legislators proposed allowing online gambling as part of a massive gambling expansion package.

“While details about Dent’s plan are scant, the tactic sounds like a repeat of the scheme he and other members of Congress cooked up in 2016. For years, prohibitionists have fought and failed to enact a ban on state-based internet gambling through the normal legislative process,” Michelle Minton, a fellow at the Competitive Enterprise Institute, wrote in a blog post.

The Sands Bethlehem Casino is located in Dent’s Congressional District. The resort is owned by Las Vegas Sands Corporation, whose Chairman and Chief Executive Officer Sheldon Adelson has battled online gambling. The extent of Dent’s and Adelson’s relationship is unclear. But, according to the website www.legaluspokersites.com, “While Sheldon Adelson will continue to support politicians who do his bidding to outlaw online poker and casino games, Dent’s decision not to run in 2018 gives Adelson less influence over his actions in 2017 and 2018.” However, the site, added, “Without an election pending in 2018 for Dent, he has fewer reasons to worry about any backlash from supporting Adelson or any legislation that may be unpopular with voters. If Adelson can benefit Dent in his future career – whether in or out of politics – that may be a sufficient reason to follow through with the promise to ban online gaming.” As a result, the website warned, “Poker supporters must keep their eyes on Dent during his time of transition. He has ample time to ban online gaming and remain virtually unnoticed for it. This is what should worry the poker community.”

Dent is the second RAWA supporter to announce his retirement from Congress this year. Utah Rep. Jason Chaffetz, chair of the House Appropriations Committee and the primary RAWA sponsor, resigned his seat in May.