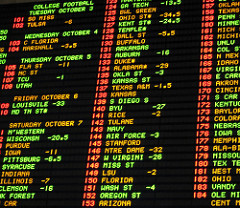 A 2017 study by Oxford Economics commissioned by the American Gaming Association estimated sports betting could become a $41.2 billion industry and provide $3.4 billion in taxes to state and local governments. Currently about 18 states have introduced or will propose sports betting legislation in anticipation of the U.S. Supreme Court lifting the federal ban against it, according to a research by Eilers & Krejcik Gaming. However, that same research indicates legislation in only 11 of these states is likely to pass.

Legislation introduced by Iowa state Rep. Ken Rizer, chairman of the House State Government Committee, seeks to start the conversation about sports betting. Rizer said his House Study Bill 592 will discover “where Iowans want to go with” sports betting. Besides introducing the measure, Rizer asked state Rep. Jake Highfill, chairman of the Local Government Subcommittee, to “create a bill with the highest possible chance of passing.”

While still thin on details, Rizer’s legislation would allow “advance deposit wagering” with state-licensed operators, either in person at a licensed facility authorized to conduct gambling games, or from any other location by phone or other electronic means. The tax rate for sports betting also would need to be revisited, since the current rate of 33 percent is 23 points higher than West Virginia’s proposed legislation, and way above Nevada’s 6.75 percent.

In addition, the bill does not make clear whether the Iowa State Lottery or the Iowa Racing and Gaming Commission and state casinos would manage sports betting regulation and licensing.

Rizer and Highfill’s legislation is opposed by the National Basketball Association and Major League Baseball. Both have numerous lobbyists registered against the bill although both leagues favor sports betting in Indiana and New York. Analysts believe the leagues want a direct cut of sports betting action, like the 1 percent “integrity fee” on the gross amount of money wagered, offered in an Indiana sports betting bill, that actually equals 20 percent of what remains after pot money has been paid out.

The integrity fee “would kill sports betting in any state,” said Wes Ehrecke, president of the Iowa Gaming Association. He noted about 95 percent of the money wagered would be returned to gamblers, while the remaining 5 percent would be divided among the state, federal taxes, overhead expenses and a small share of profits for casinos and community groups. “It is unfortunate there wouldn’t be a good partnership with all the leagues, because they will benefit from people watching games and betting on games. But there certainly doesn’t need to be an integrity fee,” Ehrecke said.

NBA spokesman Mike Bass said that the basketball league remains committed to work with legislators to “ensure that sports betting laws include these protections.” MLB spokesman Pat Courtney added, “Sports betting legislation must include certain protections to mitigate risk to our game.”

In West Virginia, state Senators Mike Woelfel and Charles Trump sponsored SB 415 which would legalize wagering on certain professional or collegiate sports events. It directs the first $15 million of revenue to the Lottery fund which, by statute, must be used for education, tourism and seniors; anything above $15 million would be directed to the state’s general revenue fund. A similar bill will be introduced in the House.

Woelfel said, “Wagering is happening, and I believe the state’s estimates are conservative. This is the next logical step to add revenue that’s available to us, in an activity that people enjoy participating in.” Trump added, “Sports betting is going on now, unregulated, on the black market. This bill would position West Virginia to take advantage of an opportunity. It would help us with a lot of challenges we have in our budget right now,” such as funding education. Last year the West Virginia Lottery commissioned a study that determined sports betting could generate $5-$9 million in its first year.

Under SB 415, sports betting would take place in locations that already have gaming licenses, like casinos and racetracks. A mobile app also may be established. West Virginia Lottery General Counsel Danielle Boyd said, “The mobile app is a key component to this. We are looking at a black market right now that is estimated at $250 million illegally wagered, just in West Virginia. A lot of it is done on offshore sites, through websites and mobile devices. The convenience of transferring that black market has to be there, or people will continue to game on the black market.”

She explained the branded mobile app would be secured and operate through a West Virginia Lottery licensed property. “The individual would have to be physically located in the state of West Virginia to place the bet, and their age would have to be identified. All of those technologies would be in place to ensure and protect that,” Boyd said.

She added, “Sports betting would be another amenity that will attract tourists to West Virginia. Once they’re on site, they might put some money in a slot machine or on a table. They’re going to buy drinks, go to a restaurant. Hopefully, they’re putting a lot more money into our economy indirectly as well. We expect the U.S. Supreme Court to come back with a favorable decision that will open the market. When they do, we want to be ready.”

And in Missouri, state Senator Denny Hoskins agreed to include a provision allowing casinos to offer sports betting in a measure legalizing slots in bars and convenience stores. The legislation, endorsed by a Senate committee on a 4-2 vote, would allow up to five video gambling machines in taverns, convenience stores, restaurants and truck stops, and up to 10 machines in veterans and benevolent organizations, with bets capped at $2 and winnings at $500.

An analysis indicated after four years, about 20,000 machines could be in operation, generating up to $127 million in revenue for the state’s lottery fund, with the first $100 million directed to high education and veterans groups.

Hoskins added the sports betting clause after the state’s casino industry expressed opposition to his measure. Sports betting could bring in up to $60 million annually to balance revenue casinos could lose to video gambling.

Mike Winter of the Missouri Gaming Association said legalizing slot machines would represent the largest gambling expansion since voters approved casinos in 1992. “This is a very substantial change in policy. We do have considerable concerns with the legislation,” he said.

In the Missouri House, state Rep. Bart Korman introduced a bill that would allow gaming license holders—including daily fantasy sports operators–to add sports betting to their offerings. The measure “authorizes the Missouri Gaming Commission to establish standards and procedures for sports wagering in the state of Missouri.” Missouri legalized daily fantasy sports in 2016 and five companies, including DraftKings and FanDuel, operate in the state. The bill also would allow the state lottery to develop games based on sporting events.