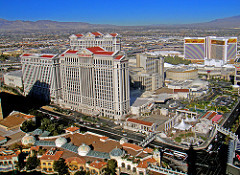 The initial public offering for Vici, the real estate investment trust created by Caesars Entertainment to assume ownership of 20 of the operator’s casino resorts, outperformed expectations to become the fourth largest REIT IPO in history and the largest hotel REIT.

“There is growing interest in gaming real estate as a real estate asset class worthy of institutional investment,” Vici Chief Executive Officer Ed Pitoniak told the Las Vegas Review Journal. “It is still a relatively new sector versus so many other well established REIT sectors. We are fortunate to be a point where that interest is growing strongly.”

VICI posted net income of $439 million on revenues of $649 million for the first nine months of 2017, and is targeting net leverage of 5 to 5.5 times adjusted earnings, Pitoniak told the newspaper. REITs must return at least 90 percent of taxable income to shareholders.