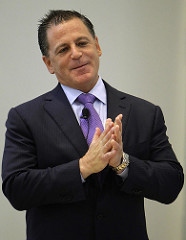 Dan Gilbert, the founder of Quicken Loans and the owner of the NBA’s Cleveland Cavaliers, has reportedly put Jack Entertainment, which has interests in six casinos and racetracks, up for sale. In a Bloomberg reports, Gilbert has been negotiating with former partner, Caesars Entertainment. He entered the gaming industry in 2006 as a local partner for a Cleveland casino, once called the Horseshoe, and now Jack Cleveland.

While Bloomberg gave no reason for the sale, Crain’s Business reported that Gilbert may be interested in buying the Detroit Tigers, his hometown team and the headquarters of Quicken Loans. Major League Baseball has a rule prohibiting ownership by anyone with gambling interests. The Tigers were bought by Mike lllitch, the founder of Little Caesars Pizza in 1982, but when Mike died in 2017, he passed the team to his son, Chris, rather than his wife Marian, because she owns Motor City Casino in Detroit. While the Illitch family says they are not interested in selling the Tigers, Marian owns the NHL Detroit Red Wings, and has delivered four Stanley Cup championships since buying them.

The Tigers are valued at $1.2 billion, well within Gilbert’s budget.

In addition to the Cleveland Casino, Jack Entertainment also owns casinos in Cincinnati and Detroit (Greektown), a partial interest in Horseshoe Baltimore (with Caesars), Jack Thistledown, a racino near Cleveland, and Turfway Park, a horseracing track in Kentucky.

Jack is reportedly working with Deutsche Bank and Credit Suisse in the sales process, but neither Jack, the banks nor Caesars would comment on the Bloomberg report.