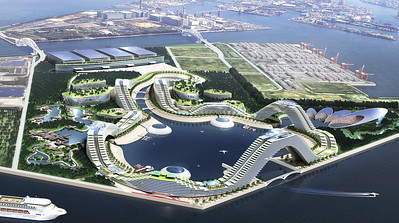 In the Japan IR race, lawmakers in one potential jurisdiction, Osaka (Yumeshima Island at left), have conceded they may have to wait until after the 2025 World Expo to open a proposed integrated resort. In another market, Hokkaido, a U.S. gaming operator says it’s still wants to develop and open an IR—even though Hokkaido has officially passed.

Japan is gearing up to open a trio of multibillion-dollar integrated resorts, bringing the first legal casinos to the country. As the official bidding approaches, operators, developers, local partners and local governments are parrying for position.

Even parties that have taken a pass—like the government of Hokkaido—are still swept up in the tide of events. Business groups in Hokkaido tell Inside Asian Gaming they haven’t given up on their dream of hosting an integrated resort, though Governor Naomichi Suzuki stated clearly in November that Japan’s northernmost main island is not interested in an IR.

The Tomakomai Chamber of Commerce and Industry told IAG, “This outcome is very disappointing, but we have not given up on an IR and we want to continue with the project.”

Chairman Akihiko Mayumi of the Hokkaido Economic Federation, who submitted a formal request for Hokkaido to pursue an early bid, echoed that feeling. “This is a terrible shame,” he said. “For Hokkaido, an IR was considered to be a project that would lead to an explosion for the food and tourism industries.

“Hokkaido has abundant nature and food culture, and there is great potential for inbound visitors,” Mayumi added. “I look forward to continuing with our efforts to become an attractive tourist destination.” And Mayor Hirofumi Iwakura of Tomakomai City said, “I can only say that it is a real shame. Frankly, I just have this feeling of ‘why?’”

Moreover, Hard Rock Japan, the most ardent suitor for a Hokkaido IR, also insists it will not surrender its goal of developing there. The U.S.-based tribal operator issued a statement calling the governor’s decision “very regrettable” and added, “we will continue to do our utmost to help citizens understand the efforts and natural environment in order to attract IR to Hokkaido. We will continue to communicate with other relevant parties inside and outside of Hokkaido to realize an IR.”

In Osaka, meanwhile, Mayor Ichiro Matsui has finally conceded that his plan to fast-track an IR development to open before the 2025 World Expo is not realistic. He now has his eyes on an opening date in 2026.

“If we are working together and then impose an unreasonable condition, we couldn’t really call ourselves ‘partners,’” the mayor explained.

Osaka Governor Hirofumi Yoshimura added, “Our efforts would be meaningless if no firm accepts the public tender.”

As the planning continues, the Japanese government has postponed making a decision on a proposal to tax the casino winnings of tourists due to opposition from the Liberal Democrat Party (LDP), among others. The LDP is concerned that such a tax would be viewed by investors as a liability. The government’s basic policy draft, setting criteria for IR operators, will be finalize at the beginning of 2020.