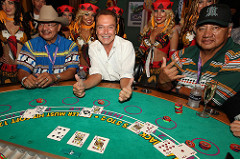 Senior U.S. District Judge Robert Hinkle recently rejected the state of Florida’s request to reconsider his ruling allowing the Seminole Tribe of Florida to continue to offer blackjack and other banked card games at five of its seven casinos. In a two-page order, Hinkle said, “For the most part, the motion simply reargues the merits. The original opinion correctly analyzes the issues. This order denies the motion to alter or amend.”

The state wanted Hinkle to order the tribe to remove the games.

Previously, on November 9, Hinkle had ruled that state regulators had breached an agreement with the tribe by allowing dog and horse racetracks to offer card games similar to those that were supposed to be exclusive to the Seminoles in exchange for paying $1 billion to the state over five years. The agreement was part of the 20-year tribal-state compact enacted in 2010. Hinkle ruled the tribe could keep its blackjack tables through 2030.

In a memo, the Seminoles said Hinkle properly found that those games, known as designated player games, “are ‘banked card games’ (like blackjack) based upon reasonable interpretations” of federal Indian gambling law, state law and testimony at trial.

In addition, Seminole spokesman Gary Bitner said the tribe paid the state nearly $20 million in December in gambling revenue sharing. Bitner noted, “As further evidence of its positive approach, the tribe is continuing to make monthly payments to the state that will total $306 million this year.”

The tribe and the state appear to be in talks to negotiate a new agreement. In the last legislative session, lawmakers failed to approve a 7-year deal offering the tribe exclusivity for blackjack and adding craps and roulette, in exchange for $3 billion in gambling revenue.

Both state House Speaker Richard Corcoran and state Senate President Joe Negron said they support the deal and plan to present it to lawmakers in the upcoming session. However, Corcoran said any agreement must include an overall reduction in gambling in the state.