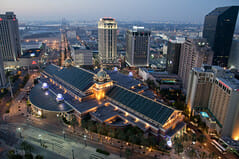 A Louisiana judge has ruled that Harrah’s New Orleans (l.) must pay an estimated $30 million to $50 million in back taxes on comped and discounted rooms at its own and third-party hotels. A separate trial will determine the precise amount. Harrah’s says it’s exempt from the state taxes, though it does pay local hotel taxes on discounted and comped rooms to Orleans Parish.

Judge William Morvant of the 19th Judicial District in Baton Rouge recently sided with the Louisiana Department of Revenue against Harrah’s New Orleans. Morvant has ordered that Harrah’s should pay back taxes on comped or discounted hotel rooms dating back to 2001, when legislators revised the agreement allowing the company to operate Louisiana’s only land-based casino.

A trial set for September will determine the amount Harrah’s actually owes, estimated at $30 million to $50 million. In his ruling Morvant wrote, “There’s nothing vague and nothing ambiguous about this.”

Morvant also ruled that Harrah’s should pay taxes on the rooms it buys from third-party hotels. Harrah’s attorneys claimed the company paid taxes on those rooms when it purchased them from the hotels. In addition, Harrah’s would have to pay taxes for discounted and comped rooms for the 340-room hotel it’s planning to build as part of its recent license extension to 2054.

In 2001, when Harrah’s emerged from Chapter 11 bankruptcy, state lawmakers and other officials allowed the company to open restaurants and a hotel at its New Orleans casino. Legislators also lowered the casino’s annual lease payment from $100 million to $60 million. Soon after, Harrah’s began offering discounted and comp rooms at third-party hotels and in 2006, when its hotel opened, it began offering customers free discounted rooms. Harrah’s claims the 2001 law exempts the company from paying sales and occupancy taxes to the state on comped or discounted rooms at its own hotel or third-party locations.

In the lawsuit, the state said Harrah’s has not paid sales and occupancy taxes on those rooms. The Department of Revenue said Harrah’s should pay 9 percent in hotel taxes on any room it gives away; for example, it would owe $18 on a $200 room.