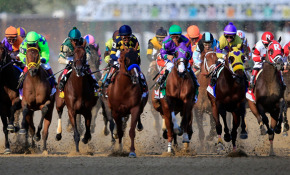 Want to savor the Kentucky Derby on another level? Watch the field’s creation for the May 5 event at Churchill Downs over the next few weeks.

The seven big events, worth 100 qualifying points to each race winner, 40 for second, 20 for third and 10 for fourth, begin March 24 with the Louisiana Derby at Fair Grounds. One week later come two powerhouses, the Florida Derby at Gulfstream Park and United Arab Emirates Derby in Dubai. The races also carry significant purses, with $2 million for the UAE and $1 million apiece for the Florida and Louisiana Derby races.

The Kentucky Derby qualifying system spreads into April, with the Wood Memorial at Aqueduct, the Blue Grass at Keeneland Racecourse and the Santa Anita Derby unfolding April 7. The Arkansas Derby at Oaklawn Park completes the 100-point events. The likely Kentucky Derby winner will emerge from one of these races. Always Dreaming, the 2017 champion, previously won the Florida Derby.

Racing officials switched from a purse-earnings to a points system a few years back and also eliminated sprint races from the Kentucky Derby qualifying picture. This has impacted the famed Run for the Roses because fewer “speed horses” are allowed into the race. They must be proven in distance events. The setup has resulted in fewer horses being compromised by speed duels and fewer long shots emerging from the back of the pack. The winner usually runs closer to the pace.

Because of this structure, the favorite has won the last five Kentucky Derby races.

A horse winning any of the prep events will obtain enough points to enter the Run for the Roses. Many of the prep races are 1 1-8 miles, but the UAE event carries a 1 3-16 mile distance. That could be significant because every Kentucky Derby horse tries 1 1-4 mile distance for the first time. If the UAE winner enters the Derby, he’ll only have to stretch out 1-16 of a mile to complete the race.

On May 5, you will see the most exciting two minutes in sports, as the Derby has been called. For you, it may also cap the most exhilarating six weeks of assessment.

In case your NCAA bracket is destroyed by the time you read this, here are some encouraging things to look forward to…Major League baseball makes its earliest start ever, March 29, and will have all 30 teams playing on opening day for the first time since 1968. This will provide some extra days off for the teams and a fix for those who want action.

The Vegas Golden Knights, the greatest expansion team ever, headlines a group of new kingpins in the NHL playoff picture. The post-season begins April 11. Nashville, Tampa Bay and Winnipeg, teams rarely mentioned as serious contenders, have had great seasons and should make playoff runs.

In the NBA, Houston, Golden State, Boston and Toronto have made themselves look formidable for the playoffs, which start April 14.