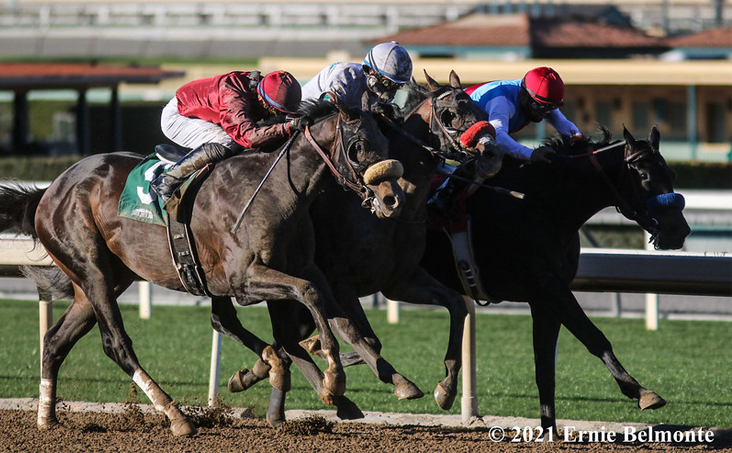 They just keep on coming—the Kentucky Derby prep races leading up to the Run for the Roses. This weekend's trifecta includes the Santa Anita, the Blue Grass Stakes, and the Wood Memorial. Saddle up!

They just keep on coming—the Kentucky Derby prep races that lead up to the Run for the Roses in May.

This Saturday is a trifecta of Kentucky Derby preps, featuring the Grade 1 Santa Anita Derby, the Grade 2 Blue Grass Stakes from Keeneland, and the Grade 2 Wood Memorial from Aqueduct. These races will bring clarity and focus to what remains a fairly open path to the May 1 Run for the Roses.

All three offer 100-40-20-10 Derby qualifying points to the Top 4 finishers. That’s enough to get the winner (and in many cases, the runner-up) a Derby gate date.

Speaking of Baffert, not surprisingly, he brings the favorite into this year’s Santa Anita. No, it’s not Life Is Good. Baffert’s star 3-year-old prodigy—who was the Derby futures favorite on most boards—underwent surgery for an ankle chip in his left hind leg last Friday and is off the Derby trail. 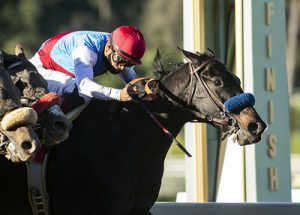 So in the equine edition of Next One Up, Medina Spirit inherits favorite status in this Kentucky Derby prep race. He would have inherited an undefeated record, too, if he hadn’t run against Life Is Good in the Grade 3 Sham Stakes or the Grade 2 San Felipe. Both times, Medina Spirit finished second to his stablemate: by three-quarters of a length in the Sham, and by eight in the San Felipe.

In between, Medina Spirit grittily beat Roman Centurian and eventual Louisiana Derby winner Hot Rod Charlie in the Grade 3 Robert B. Lewis in late January. The versatile Medina Spirit has already beaten four others in the field: Roman Centurian, Dream Shake, The Great One and Parnelli. There’s nothing to suggest any member of that quartet has either the experience or speed—or both—to reel in a gutsy horse like Medina Spirit.

Bet on the Santa Anita and other Kentucky Derby prep races at TwinSpires.com. Earn a $200 cash bonus when you sign up today.

The same clear picture comes out of Kentucky, where Essential Quality is your prohibitive 3-5 favorite to win the Blue Grass Stakes. This Kentucky Derby prep, the headline of Keeneland’s opening weekend, brings a pedigree as lush as its surrounding Kentucky countryside to the Derby picture. Established in 1911, the Blue Grass promptly sent its inaugural winner—Meridian—to the Derby winner’s circle.

Blue Grass runner-up Street Sense (2007) was the last race alum winning the Derby. Recently, only 2018 Derby runner-up Good Magic came out of the Blue Grass to find the Derby board, a trend 3-5 favorite Essential Quality and his Godolphin connections hope to snap this year.

The undefeated colt and Champion 2-Year-Old of 2020 for his Breeders’ Cup Juvenile win and Breeders’ Futurity victory—both over this same track—Essential Quality is the essential quality of this field. He’s run only once in 2021: his 4 ¼-length drubbing of the Southwest Stakes field at Oaklawn Park in late February.

“It’s very rare for a horse to be able to be 4 for 4 and have different tactics,” trainer Brad Cox said. “He’s won from three-quarter all the way to 1 1/16 miles at the Grade 1 level. I just think it speaks volumes to actually how good he is and how much talent he has. We’re in a good spot with him.”

Highly Motivated hasn’t run more than a mile and hasn’t shown the finishing kick to handle 1 1/8 miles. Keepmeinmind won the Grade 2 Kentucky Jockey Club, finished second in the Breeders’ Futurity and third in the Breeders’ Cup Juvenile, the latter two to Essential Quality. But he also finished an awful sixth in the Rebel Stakes. So Keepmeinmind’s closing ability doesn’t fit this Kentucky Derby prep well.

The Grade 3 El Camino Real winner at Golden Gate Fields, Rombauer is one of those nice horses who contends in most of his outings, but doesn’t have the speed to win a strong Grade 2 like this. He finished 6 ½ lengths behind Essential Quality in the Breeders’ Cup Juvenile. Hidden Stash finished second by three-quarters of a length to Helium in a weak Tampa Bay Derby. He, too, comes with more questions than answers.

Bet $50 and Get $50 on your first sports wager at BetAmerica.com! Just create a new player account, make your first deposit and you’re in the money. 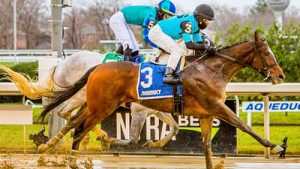 That takes us to the last of this week’s Kentucky Derby Preps, the Wood Memorial. The race does offer some intrigue. After all, it not only sent 11 winners to the Kentucky Derby title, but claims four Triple Crown winners: Gallant Fox, Count Fleet, Seattle Slew and the iconic Secretariat, who finished third in the 1973 Wood Memorial.

That said, the Wood Memorial hasn’t spawned a Kentucky Derby winner since Fusaichi Pegasus in 2000. Four serious candidates seek to break that spell: Brooklyn Strong (abv.), Prevalence, Risk Taking and Weyburn. Each can make a strong case to win and each brings plusses and minuses to the gate.

For Brooklyn Strong, it’s rust. He hasn’t run since winning the Grade 2 Remsen at Aqueduct in early December. Now, the gelding is asked to go 1 1/8 miles in a deep field. For Prevalence, it’s class. He’s 2-for-2, but the “2s” come in a maiden and a one-mile allowance he won by three lengths at 1-10. He has to win or finish second to make the Derby field.

And for Weyburn, it’s a mystery whether he can hold his current form. It took him three tries to break his maiden. After he did, Weyburn blew up the Aqueduct toteboard, winning the Grade 3 Gotham last month at 46-1. In this Kentucky Derby prep, will he come in sharp after already clinching enough Derby points (50) to qualify?

AllRecipes.com combines the Kentucky Derby and Cinco de Mayo for a refreshing twist on tradition.

As we near the end of Derby Prep season, keep an eye on the trifecta of events this weekend. There could be a winner among them.

Keep up with Kentucky Derby preps and signature events across the calendar! Subscribe below to iGamingPlayer for insights from resident expert Dawn Harris.