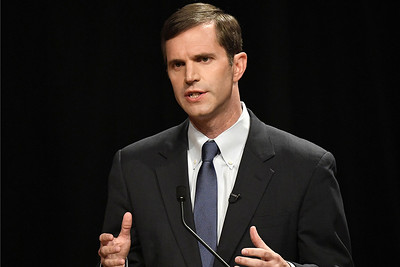 How would these programs be funded? Beshear said, “My hope, moving into the future, is that we can embrace full, expanded gaming to compete with Indiana, Ohio and the rest of our neighbors, Republican-led states that are taking Kentucky dollars, Your viewers probably can drive 40 miles in any direction and hit a casino.”

In particular, sports betting, plus small taxes on cigarettes and vaping and an increase in the limited liability entity tax would fund Beshear’s proposals for generating more money for Kentucky. “Sports betting represents some expanded gaming even if it is not full blown. In sports betting $20 to $40-million we can do great things. Let’s just keep the dollars here and let’s take the jobs it creates,” Beshear said.

Legislation to expand casino gambling and allow sports betting has been filed in the General Assembly. Senate Majority Leader Damon Thayer said, “I’m for sports wagering in Kentucky and I think that is something I agree with the governor on as something we need to pass.” Senate Minority Leader Morgan McGarvey added, “We should have expanded gaming here. We should give people the ability to vote on it.” State Senator Johnny Ray Turner noted, “I think we should have a constitutional amendment and we should vote it out and let people vote on it.”

Lawmakers opposed to expanded gambling include State Rep. Danny Bentley who said, “We already have gambling on horses. I think to expand it I don’t think the tax we get from it would cover the cost of the socio-economics of it.” State Senator Robin Webb added, “I personally don’t like casinos. I think it preys on the vulnerable citizens of people that can’t afford it.” And state Sen. Whitney Westerfield tweeted, “Awfully easy to deliver a speech of promises to which no one objects and no cuts when the money is make believe”.