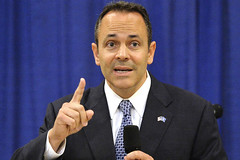 Democratic gubernatorial candidate and Kentucky Attorney General Andy Beshear recently provided more details about his plan to expand gambling as a new revenue source for the state’s pension system, which is in the red for $43 billion. Specifically, Beshear said his plan would legalize casinos, sports betting, fantasy sports and online poker and generate $1.7 billion in annual economic activity. Currently Kentucky allows a lottery, bingo and horseracing.

“Expanded gaming is a long-overdue and commonsense way to make Kentucky more competitive and protect the hard-earned pensions of our teachers and first responders. Kentucky can’t afford to fall behind our neighboring states who are moving forward with the rest of the country on expanded gaming. We lose out on hundreds of millions of dollars a year. As governor, I will work to legalize sports betting, casinos, fantasy sports and prepare for online poker and use the revenue from these activities as a dedicated funding stream for our public pension system.”

Beshear added, “While Matt Bevin is making up excuses and false claims, Indiana and our neighboring states continue to steal our revenue. I’ll always put the best interests of our people first, and that includes expanding gaming to create new opportunities here in Kentucky.”

Beshear’s campaign also said the expanded gambling plan would include increased services for people with gambling problems and nonprofits that treat gambling addiction.

Republican Governor Matt Bevin has declared himself “agnostic” on sports betting, and he said casino gaming would not have much impact on funding pensions. “The idea that we could make maybe $200 million a year with casino gambling taxes, means there are billions being spent that might better be spent somewhere else. If we all wanted to gamble and smoke pot at the same time, it would still be 200 years, just to earn the money we already owe today. These are not serious solutions,” he said.

He also stated in July gambling had driven people to commit suicide in casinos. “Somebody takes their life in a casino because they’ve wasted the last semblance of dignity and hope that they had,” Bevin stated during a radio interview.

The election for governor will take place November 5.

Despite bipartisan support, the state legislature has not yet passed an expanded gaming bill. Last year, state Rep. Adam Koenig filed a bill that would have allowed sports betting, daily fantasy sports and online poker. The House Licensing, Occupations and Administrative Regulations Committee unanimously approved the measure but it never reached the floor. Koenig said he and state Senate Majority Leader Damon Thayer will co-sponsor sports betting legislation for the 2020 session. State Senator Julian Carroll also proposed a sports betting bill last year that never reached a committee; he has pre-filed a request for a sports betting bill for the 2020 session.

State Reps. Al Gentry and Dennis Keene also proposed a sports betting bill ahead of the 2019 session which did not receive a hearing. Keene has pre-filed a request for a broader gaming bill for 2020 that will include sports betting and four casinos.

NASCAR All In With I