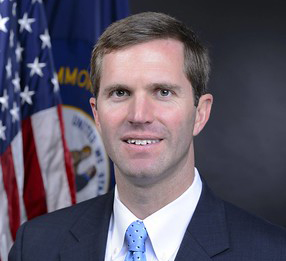 Kentucky Governor Andy Beshear recently reiterated his belief that sports betting should be legalized in the state. When asked if the time is right, Beshear responded, “I believe the time was right years and years and years ago when virtually every state around us, all Republican states, already have it. We talk about having a competitive business climate but right now we’re not allowing business that every state around us is.”

Beshear noted five neighboring states allow sports betting—Illinois,  Indiana, Tennessee, Virginia and West Virginia—and Missouri and Ohio are moving forward on legislation. “The fact is you can drive right across the border, virtually any of our borders, and on your cell phone make a bet, and a dollar or a percentage of that bet is going to go to those states for their roads and bridges, for their schools and for other needs. The fact that we haven’t done it at this point is not only silly but puts us at a competitive disadvantage,” he said.

Last year, state Rep. Adam Koenig’s proposed sports wagering bill stalled in committee. He is sponsoring sports betting legislation again this year although there may not be enough time to consider it in the 30-day session, since legalizing historic horseracing is the top priority, he said. The Kentucky Supreme Court last year ruled some of the games did not comply with state pari-mutuel laws. In the last fiscal year, historical horseracing machines generated $33.8 million in tax revenue for the state.

“Historic horseracing is something that’s absolutely necessary if we want to continue to be the thoroughbred capital of the world. It supports thousands upon thousands of jobs and it’s time for the Senate and the House to step up and do right for an industry that we cannot let go somewhere else,” Beshear said.

He added he’d like to expand gambling to also include casinos. “Let’s go ahead and do full casino gaming. Indiana has it. They make hundreds of millions of dollars a year in revenue. We ought to do that. I’m willing to start with sports betting, but how about we compete with West Virginia, Pennsylvania, Indiana, Ohio and Missouri that all have casinos at or near our borders,” Beshear stated.

Meanwhile, he said, “We want to help push sports betting over the line this year. We think once people see that and the opportunity that’s there that hopefully we’ll be closer to the full-blown gaming that I believe the majority of Kentuckians want and are tired of their dollars paving the roads in our neighboring states.”