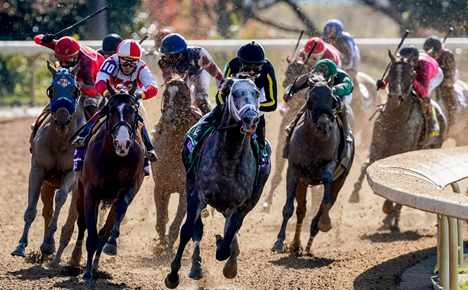 It’s a star-studded field at the Whitney Stakes at Saratoga, including Swiss Skydiver. But one Thoroughbred, Knicks Go, stands apart from the pack.

Silver State comes into Saturday’s G1 Whitney Stakes at Saratoga with a six-race winning streak. It includes one of the country’s marquee races: the Grade 1 Metropolitan Handicap on Belmont Stakes Day. Silver State hasn’t lost since finishing seventh in the Louisiana Derby—17 months ago.

And he’s the 4-1 third choice on the morning line. 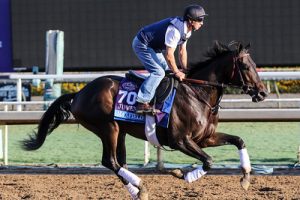 Maxfield comes into the Whitney 7-for-8—five of those scores coming in graded stakes. His only blip was a third in March’s G1 Santa Anita Handicap in his first race outside the Central or Eastern time zones. Maxfield rectified that oversight with victories in the Alysheba in April and the G2 Stephen Foster in June. Both featured triple-digit Beyer Speed Figures: a 105 in the Alysheba and 103 in the Stephen Foster.

So he’s your Whitney favorite? Oh, no. He’s the second favorite at 8-5.

Swiss Skydiver is one of the most dynamic fillies of her generation. She’s only 1-for-2 this year, but that one came in the G1 Beholder Stakes at Santa Anita Park. She’s a three-time Grade 1 winner and six-time graded-stakes champion who won last year’s Preakness Stakes, beating eventual Horse of the Year Authentic in the process.

And she’s the fourth-favorite at 6-1.

Are you getting an idea of how good a race Saturday’s Whitney is?

Yes, it’s a “Win and You’re In” Breeders’ Cup Challenge Series race for that event’s flagship race: the Classic. Yes, there are only five horses in what is traditionally one of the best older-horse races of the year. And yes, it’s rather appropriate that the Whitney makes up for quantity with a blue-blooded quality field. This race is named after one of America’s most prominent families, with roots going back to the 18th century. William Collins Whitney brought his family into the Thoroughbred game in 1898. Generations of Whitneys followed, owning horses that won every major American race, including all three Triple Crown events.

Unlock the bet-back offer each day at the Saratoga meet. Get your bet back on selected daily races at TwinSpires.com. Through September 6. 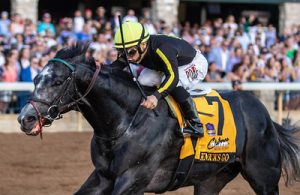 So who’s the favorite to join that August list? Who comes in carrying shorter odds than the owner of a six-race winning streak, a colt who won seven of his eight career races, one of the most exciting distaff runners on the planet?

That would be Knicks Go, the 6-5 morning-line favorite.

Knicks Go is easily the fastest horse in the field. He comes in after taking apart an overmatched Cornhusker Handicap field by 10¼ lengths. His 113 Beyer for what essentially was a glorified workout was a career best, and the best Beyer by an older horse going over a mile this year.

In last year’s Breeders’ Cup Dirt Mile, Knicks Go set insane fractions: a 21.98-second opening quarter-mile and a 44.98 opening half. Not only did he sustain those, but his 1:33.85 mile time was a Keeneland track record. Proving the 108 Beyer was no fluke, Knicks Go went out in January and won the Pegasus World Cup with the same Beyer.

Knicks Go lost some of that momentum in the winter and spring, finishing fourth in the Saudi Cup, then a poor fourth in the Met Handicap. Both those races were around one turn, which trainer Brad Cox corrected by sending Knicks Go out to the provinces at Iowa’s Prairie Meadows for the Cornhusker.

“That gave us the confidence to try the Whitney,” he said. “The races solidified that the horse needs two turns, which he’ll get in the Whitney.”

Bet $50, Get $50 on your first sports bet at BetAmerica.com. Create a new-player account and you’re off!

Putting aside more than $4.8 million in career earnings, Knicks Go makes things simple. Should he break well with his trademark early speed, this race could be over in a hurry. None of the other four horses, talented and accomplished as they are, have that gear to them.

Sizing Up the Colts 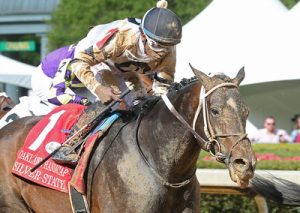 And that includes Silver State, who beat Knicks Go in that one-turn Met Handicap mile. He comes in after firing three bullet workouts over Saratoga’s Oklahoma training track. The last one of those came July 28. It took the 4-year-old Hard Spun colt 1:00.21 to cover the five furlongs.

“His work the other day was exactly what we asked,” said trainer Steve Asmussen, who’s closing in on the all-time North American record for wins by a trainer (9,445). “(Assistant trainer) Scott (Blasi) said he’d give you a lot of confidence and I said, ‘The only one more confident than me or you is him.’ He’s won six in a row.”

Brendan Walsh feels the same way about Maxfield. The trainer brings in a fresh colt who appears to be past the physical ailments that cost him most of his late 2-year-old and late 3-year-old campaigns. Maxfield was on the front page of 2020 Kentucky Derby favorites, but suffered a leg injury that kept him on the shelf from late May to mid-December.

Since his return for a Listed Stakes race at Fair Grounds, the Street Sense colt is 4-for-5. Should Maxfield win, he’ll give his sire his second Whitney winner in three years, following McKinzie in 2019.

“He’s getting to where he’s a more seasoned horse,” said Walsh. The Whitney is “a big test for him, so we’ll see how he stacks up against them.”

Factoring in the Filly 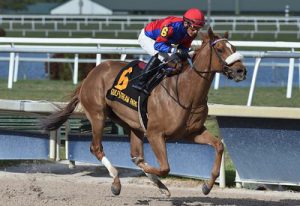 When it comes to stacking up with the boys, Swiss Skydiver and her audacious trainer, Kenny McPeek, are the current standard in that rare category. This marks the third time the Champion 3-Year-Old Filly took on colts and horses. And her record screams for itself: that Preakness victory and a second to Art Collector in last year’s Blue Grass Stakes.

Here, she’s trying to become the first female in 33 years—since undefeated Hall of Famer Personal Ensign turned the trick—to win the Whitney. But she’s coming in off an uncharacteristically spotty 2021. After winning that Beholder Mile in March, Swiss Skydiver finished a disappointing third to Letruska and Monomoy Girl in the G1 Apple Blossom at Oaklawn Park.

After that, McPeek scratched her out of the G1 Ogden Phipps due to a fever. Then, a July equine herpesvirus-1 (EHV-1) case in a barn McPeek shared with another trainer put that barn under a 21-day quarantine. That prevented McPeek from entering Swiss Skydiver in the Grade 3 Shuvee two weeks ago.

“She’s had a bumpy first half of the year,” McPeek said. “No major issues, but just stuff that kept her from showing off. … The Shuvee would have been ideal, (but) she’s been ready to run. I’ve always thought if you’re here, you run where you’re at. It’s a little bit out of the box, but she’s ready.”

Not that By My Standards is a stranger to this company. Trainer Bret Calhoun is like McPeek; neither one dodges quality. Four of By My Standards’ last six races were Grade 1s, including last year’s Breeders’ Cup Classic, which was an all-star race. He finished second in two of the four.

Eight of his last nine races were either Grade 1s or Grade 2s. In those races, By My Standards finished first or second in six. That consistency aside, the son of Goldencents is the only one of the five without a Grade 1 win.

“He’s been a very consistent and good training horse,” Calhoun said. “He runs well and brings it every time. We’re unfortunate to not get a Grade 1. This will be a deep and high-quality field. … It would be great to have the Whitney on his resume.”

Dawn Harris knows her horseflesh. Don’t place a bet without her expert analysis at iGamingPlayer.