Know These Stats & Tendencies Before the 49ers-Cardinals Matchup 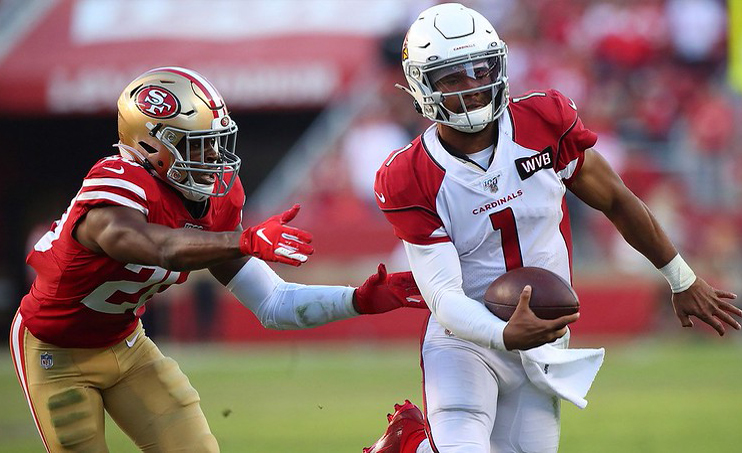 Sports bettors, here’s what you need to know as the Arizona Cardinals fight for a playoff berth against the San Francisco 49ers. A win this week could position the Cards for their first playoffs since 2015.

After losing three games straight, the Arizona Cardinals have won back-to-back games and are on track to earn a playoff spot. Last week, Arizona led 16-0 after the first quarter, only to find themselves tied after three quarters. However, they produced the final score of the game to beat the Philadelphia Eagles 33-26, improving to 8-6 on the season. A win this week combined with a Chicago Bears loss will officially put Arizona into the playoffs for the first time since 2015.

The Cardinals (-210) are favored to earn a playoff berth and the sixth-favorite to represent the NFC in the Super Bowl.

The Arizona offense is feeling good after posting over 500 yards against the Eagles last week. The caveat is that the Cards also turned it over three times, including an interception and a fumble by Kyler Murray. The second-year quarterback has had some rough weeks of late, and last week’s game was a good example of the highs and lows he can experience within a game. On the one hand, he threw for over 400 yards and three touchdowns, but the two turnovers are also troubling, especially after he started the game red hot. Arizona’s playoff hopes are largely tied to Murray’s ability to showcase his skills with DeAndre Hopkins.

Hopkins (+110) is favored to finish the season with the most receiving yards. The wide out currently leads Travis Kelce (+300) by six yards and leads Stefon Diggs (+170) by 10 yards.

Defensively, the Cardinals have limitations. Haason Reddick has stepped up to give them a serious pass-rushing threat after the injury to Chandler Jones. The Arizona secondary also has some playmakers that can provide a boost. We’ve seen them look vulnerable against the run at times, especially against teams that have a mobile quarterback. This is something to keep an eye on against the run-heavy San Francisco 49ers.

While the Cardinals have covered in two-straight, they’re just 6-8 ATS this season. After starting the campaign with an over/under record of 0-5-1, Arizona has hit the over in five of their last eight games.

This isn’t the season the 49ers envisioned after coming so close to winning the Super Bowl in February. Last week’s game saw San Francisco lose a wild game to the Dallas Cowboys (41-33) despite out-gaining them by more than 150 yards. The 49ers have now lost six of their last seven games, dropping them to 5-9 and guaranteeing a last-place finish in the NFC West ahead of what could be an interesting offseason in the Bay Area.

The quarterback position is once again a point of uncertainty. Nick Mullens was pulled in the second half of last week’s loss because he lost feeling in his arm. He was also responsible for three of the team’s four turnovers, including a pair of second half interceptions that played a critical role in the 49ers losing. C.J. Beathard looked sharp late in the contest, completing 5-of-7 passes for 100 yards. With nothing on the line, it’s possible that Beathard gets a chance to start this week, especially since Mullens has thrown nine interceptions over his last six games.

It’s hard to put too much blame on the San Francisco defense for the 41 points they allowed last week. Dallas scored one touchdown on a kickoff return while the San Francisco defense was constantly being put in bad positions because of the four turnovers the offense tallied. That being said, the 49ers remain average at best defensively, largely because of the massive amount of injuries they’ve suffered this season. Over the last seven games, the 49ers have allowed an average of 30.8 points.

The 49ers have failed to cover in six of their last seven games. They’ve lacked over/under consistency all season, going 7-7.

Get the latest sports-betting insights delivered to your in-box every week. Subscribe to iGamingPlayer below.

How to Bet This Game

A lot has changed since the Cardinals beat San Francisco 24-20 in Week 1. If Murray is at his best, then Arizona should be able to win comfortably because of their offensive firepower. However, the Cardinals’ ball security issues could help the 49ers stick around. San Francisco has also struggled with turnovers in recent weeks, which could put a major damper on their chances.

The Arizona Cardinals will meet the San Francisco 49ers Game on Saturday, December 26 at 4:30 p.m. ET. from State Farm Stadium in Glendale, Arizona. The game will be broadcast on Fox, NBC, Amazon Prime and Twitch.