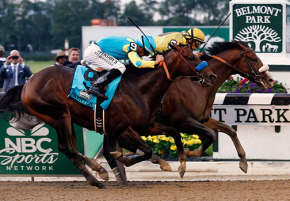 Thoroughbred horse racing’s Triple Crown series underscores two points we’ve harped on in this blog: the elements of pace and the absence of a super horse.

Cloud Computing’s rallying Preakness Stakes victory over Classic Empire would normally be rare. A horse well-positioned in the final turn of that race rarely yields a three-length lead. But, Classic Empire was spent from a head-knocking speed duel with Always Dreaming, the Kentucky Derby winner, and was nipped near the wire.

Apparently taking their cue from past Preakness events, in which speed horses have performed well, jockeys on heavily-favored Always Dreaming and Classic Empire placed them in front of the field to set up a two-horse stretch duel. But the strategy backfired. The horses fought each other at each step rather than simply running a fast time, setting the stage for 13-1 shot Cloud Computing. The fact that this became the first horse to skip the Derby and win the Preakness since 2009 (Rachel Alexandra) won’t be lost on the industry. Cloud Computing had the freshest legs down the stretch, overcoming a horse who had run just two weeks prior. An owner who believes his or her horse can make just one good effort in the Triple Crown series may also skip the Derby. (The Belmont Stakes, completing the trilogy, is June 10).

Anyone cashing the Preakness’ $1 trifecta for $1,097 richly deserves it because that payout reflects the Derby winner running completely out of the money and Senior Investment, at 30-1, storming up to nab third. The same goes for the superfecta returning more than $8,000, completed by Lookin At Lee.

Always Dreaming finished eighth in the Preakness, the first time a Derby winner flopped so badly since Super Saver in 2010. But that’s what’s possible with a competitive, non-exceptional field.

Bad Beat Hangover, as I’d call it, has been a true pattern in recent weeks. The Baltimore Orioles blow a two-run lead in the bottom of the ninth and lose to the Washington Nationals. What follows? They lose three straight games to the Kansas City Royals. The Chicago White Sox go ahead of the California Angles in extra innings only to cough up the lead and lose. What follows? They drop the next two games.

The St. Louis Cardinals squander a 4-0 lead to the Boston Red Sox and lose in 13 innings. They follow by blowing a ninth-inning lead and the game, and drop a third-straight contest in 13 innings.

If a team has been burned one night, especially an average team, think about going against them the next day if the line is right. Another item for consideration: the rarity of a three-game series sweep. They happen from time to time, but going against that trend is generally your friend.

Take a look last weekend. The Cardinals, Angels, Blue Jays, Nationals, Yankees, Padres and Red Sox all won to avert the broom. The Houston Astros lost. Teams facing a possible series sweep were 6-1. That’s some run from under the gun.