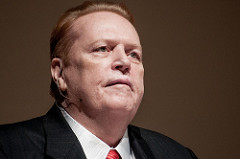 Hustler publisher and casino magnate Larry Flynt challenged a California law that prevents him from expanding his gaming empire—and lost.

Last week a federal judge dismissed with prejudice Flynt’s challenge to a Golden State law, the Gambling Registration Act, that was intended to prevent the mob from buying casinos or investing in them outside of the state.

Flynt, the owner of Hustler Casino and Larry Flynt’s Lucky Lady Casino, claimed that a California law that wouldn’t allow him to invest in out-of-state casino properties several years ago was outdated and violated his due process rights. The same law prevents residents of other states who have gaming licenses from obtaining licenses to operate a cardroom in California.

Flynt and his son-in-law Haig Kelegian Sr. argued that there hasn’t been a mob influence in Nevada in many years and that state has updated its laws so that publically traded companies to run casinos there. They said California should do the same.

Kelegian ran afoul of the existing law when he transferred ownership of an out-of-state casino to his spouse. He was fined $210,000. Flynt complained that under the law he could lose his interest in businesses based outside of California if they entered the gaming industry.

The judge rejected the complaint, finding that Flynt and his co-plaintiffs had failed to show that they would be subject to continuing harm by the law. They have vowed to appeal.