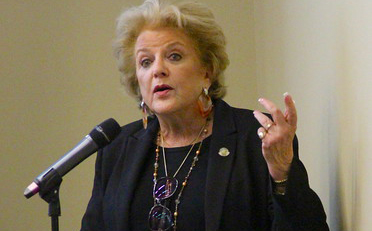 In Las Vegas, a partial return to business could come as soon as early May. Governor Steve Sisolak has refused to name a date. And, despite recent controversial statements from Las Vegas Mayor Carolyn Goodman (l.), most in the gaming industry agree about the need to take it slow.

A partial reopening of Nevada’s economy, including the all-important casino industry, could come in the early days of May, although state officials and industry leaders both stress that nothing is certain without reasonable assurances that the Covid-19 pandemic is containable.

Last week, Las Vegas Mayor Carolyn Goodman sparked widespread criticism and outright ridicule for her contention, in an interview with CNN’s Anderson Cooper, that the city’s billion-dollar gaming industry should reopen at once, and serve as “a control group” for the rest of the region. Goodman’s jurisdiction does not include the Las Vegas Strip. But Governor Steve Sisolak maintained last week that he won’t assign a date for reopening until testing has ramped up enough to allow infections to be tracked𑁋and in that way, hopefully, contained𑁋and treatment capacity is sufficient to handle any new cases.

He said state officials will be looking for 14 days of “consistent and sustainable” downward trends in the number of new cases and hospitalizations.

It’s been a difficult call, considering the near total dependence of Nevada’s economy on gaming and gaming-related tourism. The jobless rate has soared in the space of a month to more than 6 percent, nearly double the all-time low of 3.6 percent in January and February. The state has been swamped with claims for unemployment benefits at the same time that the casino closures have shut off its principal source of direct and indirect tax revenues. Oxford Economics has ranked state the second-most economically vulnerable state behind Maine to the pandemic’s impacts.

As Wynn Resorts CEO Matt Maddox said, “Our economy is in a freefall.”

Culinary Local 226, the industry’s largest union and the largest in the state, has begun pushing for the industry to continue paying workers for the duration of the closure.

It’s expected casinos will be included in the federal guidelines for partially reopening the U.S. economy known as Phase I. That would point to a resumption of business sometime between May 5 and 15. But if that happens it will be anything but business as usual. Many non-gaming amenities will remain closed, strict social distancing measures will dictate limited activity on gaming floors, there will be constant cleaning and sanitizing of all public and back-of-house areas, employees will be equipped with face masks, it’s likely guests will be too, and body temperature scans will be mandatory on arrival.

Then again, whatever form the reopening takes, it’s not expected to bring a swift end to Nevada’s woes, considering the havoc the pandemic has wrought on the travel industry nationwide amid widespread stay-at-home orders, mandated business closures and fears of big gatherings.

As Las Vegas analyst John Restrepo of RCG Economics noted, “Even if we were under a glass bubble and everything was open here, there wouldn’t be people traveling here.”

In any event, Sisolak is adamant that the state must reach a point, as he put it, “where saving lives and restarting our economy are not mutually exclusive.”

The gaming industry, despite the tens of millions of dollars it’s losing every day, apparently agrees.

“Our members understand it is critical to take a measured approach that ensures the reopening of Nevada’s tourism industry is done strategically and correctly for the long-term health of our industry and its reputation,” said Virginia Valentine, president of the Nevada Resort Association.

“It is imperative to flatten this curve so we can re-emerge in a safe, sustainable way,” Maddox said.

William Hornbuckle, acting CEO of MGM Resorts International, concurred in a video message to employees recorded from his home, “We have to consider every aspect of our business so we can welcome our guests safely and keep each other safe while we do it.”

As he put it, “This is a completely uncharted path.”

As of Friday, state health officials reported 4,200 confirmed cases of the virus and 195 deaths, far fewer what was initially feared𑁋a “strong indicator,” Sisolak said, “that our aggressive control measures were both necessary and effective.”

“All of the measures that we’re monitoring do indicate that Nevada has started to reach a plateau,” Kyra Morgan, a state biostatistician, said last week. “However, there’s not sufficient data to indicate that we’ve actually started to see a significant decline in new cases.”

Which means things could change if there’s any reversion or uptick in infections.

“This is atypical,” Sisolak said. “The reopening needs to be flexible, because it’s going to rely on data, and this is a virus. There’s going to have some real-time decision-making, if we see a spike in cases.”

The possibility has not eluded gaming operators. Maddox addressed it specifically in an opinion piece published last week in The Nevada Independent detailing the company’s plans for reopening.

“The only way to cross this river is one stone at a time,” he wrote, “and we need to put our feet in the water before it is too late.”