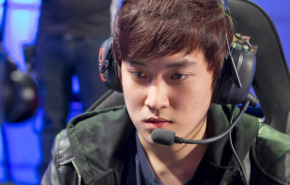 Keane may not be the flashiest player, but he’s best known for his impressive knowledge of the game. He knows how to be effective in all areas of the map. He’s more than happy to play his part, whether it’s lending the team some utility or crushing the enemy with a carry.

iGamingPlayer.com talked to Keane, which is Lae-Young’s summoner name or gamer tag, about how he became a professional player, his daily routine during the season, and the hardest and most memorable parts of his professional career.

iGamingPlayer: How did you learn about League of Legends and become a professional player?

Keane: At the time (5 years ago), almost everyone in Korea was playing League of Legends in pcbang, which is a type of LAN (local-area network) gaming center in South Korea where you can play multiplayer computer games for an hourly fee. It was very fun and made me keep playing and practicing until I became a professional.

Keane: My daily routine during the season is wake up in the morning; we practice scrims from noon to 3 p.m. Scrim is the shortened word of scrimmage, which means two professional teams will play against each other for practice. Each game takes approximately 30-45 minutes. We then take a break and practice again at 5 p.m.-8 p.m. One more break, then we practice until midnight. We also have one day off a week, which most players choose to stream those days.

What is the hardest part of being a professional gamer?

Keane: The hardest part of being a pro is not being able to meet friends for a long time. Players have to live in their team’s gaming house during the season, with not much free time. When the season ends, players may choose to go back to their hometown until the next season starts. I’m not sure about North American resident players, but players from other regions might get homesick. It was tough for me at first when I moved to the United States, but I wanted to experience life in a different region, and I think that’s how other players feel as well.

Do you have any regrets in your professional career?

Keane: Regrets in my professional career would be being too stubborn about champion picks in LCS (League Championship Series) in Season 5. I would play champions that weren’t in the Meta. Meta is the on-paper stats of everything, including using strategies based on all outside knowledge. I could have played much better champs, which would have helped my team win more.

What has been the most memorable moment as a pro player?

Keane: My most memorable moment was when I played a champion that no one played before against the best team in North America at the time. I played the champion Urgot, an out-of-meta pick, which no player has played or even played against. It was also against Soren “Bjergsen” Bjerg, the best mid laner in the region and I beat him. Everyone was talking about me as a player after that game.

Keane and Team Dignitas had a rough start to the season, but after four out of six wins in the last three weeks, they are tied with Immortals for the last playoff spot. With two weeks left of the spring spilt, Keane hopes to ride this winning momentum into playoffs. It is looking good this weekend as Team Dignitas squares off against the two lowest-ranked teams of the split while Immortals faces two of the top three teams. It could, however, come down to the very last match, as Team Dignitas and Immortals will battle it out for the last playoff spot. Worse comes to worse, Keane have to wait until the summer split to redeem himself.