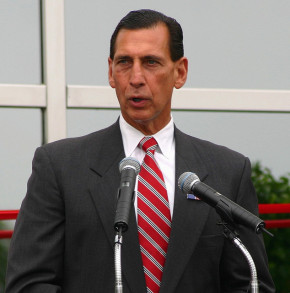 With the first arguments before the U.S. Supreme Court in New Jersey’s sports-betting challenge only a month away, the four major professional sports leagues—the NFL, NBA, NHL and MLB—and the NCAA have filed their brief with the justices.

New Jersey has appealed those rulings to the high court on the basis that PASPA is itself an unconstitutional violation of states’ rights. The sports leagues’ brief disputes that basic position. “In enacting PASPA, Congress sought to prevent the spread of state-sponsored sports gambling,” the brief states. “Congress’ power to regulate gambling on a nationwide basis is as settled as its power to prohibit states from undertaking or authorizing conduct that conflicts with federal policy.”

The court is slated to begin hearing arguments in the case December 4, with a decision expected by next spring.

“We strongly believe the relevant committees should examine the issue prior to the court’s ruling to ensure Congress is fully informed and positioned to quickly respond to the court,” the letter said.

The letter also stressed the same argument that has been made by the American Gaming Association in its campaign to overturn PASPA—that the federal ban has done nothing to curb the popularity of sports betting, but has create a $150 billion illegal market, the profits of which feeds criminal organizations.

“This massive illegal market lacks consumer protections and deprives states and local jurisdictions of revenue that would otherwise stem from a regulated marketplace,” said the letter. “In recognition of PASPA’s failure to prevent illegal sports betting and the benefits of regulations and taxing this activity, numerous states have either enacted or advanced legislative measures to authorize sports betting in recent years.”

AGA President and CEO Geoff Freeman commented in a statement that New Jersey’s efforts to enact sports betting are being repeated across the U.S. “We are seeing a trend towards sports betting in this country,” Freeman said. “Whether it’s the teams that have been placed in Las Vegas or the fact that 14 states have introduced legislation to get out ahead of sports betting, there is a trend here. The time and situation that we are in right now is far different with respect to sports betting.”

New Jersey’s appeal got additional support last week from the Washington, D.C.-based think tank Competitive Enterprise Institute, which announced it is releasing a report authored by Michelle Minton that touches on all the reasons PASPA should be repealed.

According to the Las Vegas Review-Journal, the report emphasizes consumer protection from fraud that would exist with regulated sports betting, as well as the argument that PASPA violates the states’ rights provisions 10th Amendment to the U.S. Constitution and the equal sovereignty doctrine, in that it allows Nevada a privilege not afforded other states.

“Regardless of how the Supreme Court rules in Christie v. NCAA, Congress should act to repeal PASPA and all other federal gambling laws that threaten the sovereignty of the states and put representative government that is accountable to individual citizens at risk,” Minton told the Review-Journal.

At the recent Global Gaming Expo, AGA’s Freeman predicted that even if the federal sports-betting ban is upheld by the Supreme Court, PASPA’s days are numbered, with hearings expected on bills in the U.S. House and Senate to repeal the ban outright.