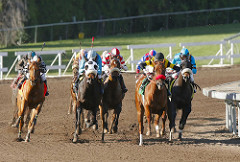 The slow slide of horseracing profits over much of the United States could be halted and even reversed if sports betting becomes legal, according to some supporters.

Many eyes in the industry are focused on the U.S. Supreme Court which is expected to issue a ruling soon on the legality of PASPA, which bans sports betting in all but four states.

In 2003 $15.2 billion was wagered on horse races in the U.S. Eleven years later that number had fallen to $10.5 billion. That number has reversed slightly in the last four years.

Some in the industry say repealing PASPA would boost betting on horses, even though that is actually legal in most states. It might also boost interest in Major League Baseball, the NFL and other sports leagues.

In anticipation of such an action by the Supreme Court some existing off-track betting facilities are making subtle changes that would enable them to quickly take advantage of sports betting if the ban is lifted.

New Jersey attorney Dennis Drazin, who is helping a local racetrack, Monmouth Park, set up a sports bar that could be converted into a sportsbook told ESPN “New Jersey has created a chance for racetracks and casinos to be involved in sports betting. I believe that the Supreme Court will rule in our favor, so the racetracks obviously will benefit. We’ll get people to come back to the racetrack — people that will stay because there will probably be in-play wagering also, so people will be engaged.”

Such facilities could off crossover betting between industries. Monmouth is looking at expanding the existing bar into the grandstand.

Drazin commented, “When you go into the grandstand, you can probably put another 5,000 to 7,500 [people]. We think the demand is gonna be that big. We would anticipate that being ready to go within two weeks of the date the Supreme Court rules.”

Kip Levin, chief executive officer of Paddy Power Betfair US & TVG told ESPN “If you look at other markets where [horse] racing is growing — and I think Australia is probably the best example — horse racing in Australia 10 years ago was in a multiyear decline. It was similar to the U.S. in that it was pari-mutuel only. And when online sports betting started to take off, you saw a shift.”

The New York Racing Association believes that lifting the ban will help the industry. David O’Rourke, NYRA vice president and chief revenue officer, told ESPN: “We definitely feel positive in the sense that these products are complementary. Right now, we handle wagers on horse racing as a sporting event. There’s likely betting on other sports going on that’s not in a regulated format, and we feel that if legal sports betting was expanded to include these other sports, it would give us the opportunity to cross-sell.”

Jay Komegay, vice president of the Las Vegas Hotel & Casino SuperBook, agrees. “I can only project that if sports gaming is expanded across the country, some of these new jurisdictions will be at racetracks. I can only see that as a positive for these racetracks, as we know a lot of them are struggling right now.”

There are skeptics, who point out that there is already a sports betting industry, just a black-market version. Whether it will come into the sun is an open question.