HomeThe ShuffleLightning Strike: Why Tampa Bay Is A Team of Destiny

Lightning Strike: Why Tampa Bay Is A Team of Destiny 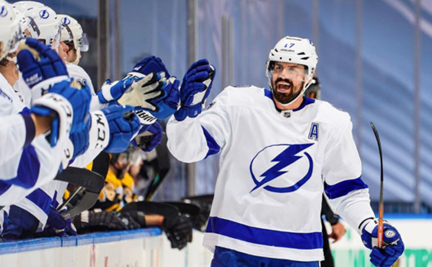 The third round of the NHL Playoffs will start next week, and by this weekend, the last four Stanley Cup hopefuls will be set. One team is starting to look like a sure thing.

The NHL Playoffs are closing in on the third round, set to begin next week. The conference semifinals were still under way as we hit September, and the Elite Eight put on a show. By this weekend, the last four Stanley Cup hopefuls will have been determined.

The odds at sportsbooks like PlaySugarHouse.com should be close to even money for the remaining Best of 7 series. Prop betting for players to score and for games to go over/under a certain total, usually 5, will be up.

Bettors who wagered on long conference semifinal series matchups were rewarded in three of them. Only one—the Tampa Bay Lightning throttling the Boston Bruins in five games—went short, as Tampa Bay became the first NHL team to reach a conference final.

Tampa Bay has been a team of destiny.

Why are the Lightning dangerous? Karma. The Lightning began the playoffs with a five, count-em, five overtime victory against the Columbus Blue Jackets. That was an emotionally exhilarating victory for them. It set the stage for the team to believe they would prevail, no matter what.

And they did. When adversity came in the fifth game of the series, with Columbus leading 4-2 with 10 minutes left, destined to send the series to a sixth game, Tampa Bay found another gear. The Lightning scored twice in the final minutes, forcing overtime.

And then they won it.

The Lightning captured four one-goal victories against the stubborn Blue Jackets, including two in overtime. Against the Bruins, the finale was decided in double overtime.

So, Tampa Bay has taken both series-clinching wins in overtime and is 3-0 for overtime games in the playoffs. That’s what teams of destiny do.

Next up, they’ll face either the New York Islanders or Philadelphia Flyers. Philadelphia, the top seed in the East, fell behind three games to one before winning Game 5 in overtime.

If Tampa plays the Islanders, the team will face a fast team that buzzes around the net and creates scoring opportunities. The Islanders have good, but not great, goal-tending.

If Tampa plays the Flyers, they oppose a team with excellent goal-tending, but less team speed. The Flyers have also been careless with the puck, prompting giveaways in their own zone that led to costly goals allowed.

In the Western Conference, the Vancouver Canucks and Colorado Avalanche stubbornly fought off overtime, and their respective series against the Vegas Golden Knights and Dallas Stars went to at least a sixth game.

The Western Conference has four gritty teams, all with something special to add. The Dallas Stars have been excellent offensively, and the Vegas Knights are a strong defensive team. That’ll be a good matchup if it occurs.