Like a Virgin, Mohegan Gaming Is Coming to Las Vegas 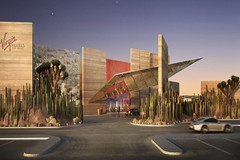 The Mohegan Tribe’s resort arm has been selected to operate the casino when Virgin Hotels Las Vegas (l.) opens next year where the off-Strip Hard Rock used to be. It will be the tribe’s first foray into Las Vegas and a first for any Indian-owned entity in the casino capital.

Terms of the multi-year agreement between MGE and Hard Rock owner JC Hospitality were not disclosed. What is known is that it will be a first for Las Vegas, which has never had a tribally owned operator before.

“Mohegan Gaming & Entertainment, as an extension of the Mohegan Tribe, pride themselves on traditional principles, in sync with modern values,” said Richard Bosworth, JC’s president and CEO. “We are excited that Virgin Hotels Las Vegas will be their first entry in the Las Vegas market.”

Mohegan Gaming CEO Mario Kontomerkos hailed the agreement as “important to all the entertainment destinations we want to be in.”

“This obviously opens that up for us, but the other big milestone is that this is going to be the first time that a Native American tribe is operating in the Las Vegas Strip market. That’s a huge milestone not only for us, but all of Indian country as well.”

“When you look at our data base, our customers come from high-density affluent markets,” Kontomerkos told news site CDC Gaming Reports. “Our customers would love the opportunity to come to Las Vegas and we will be able to offer them that choice.”

MGE also owns or operates properties in Atlantic City (Resorts), Pennsylvania (Mohegan Sun Poconos) and Niagara Falls, Ontario, and manages casinos in Washington and Louisiana for other tribes. The company also is developing a multibillion-dollar resort at Incheon International Airport near Seoul, South Korea, and is bidding on a possible gaming resort license near Athens, Greece. It’s possible as well the company could be in the running for a resort license in Japan.

“We’ve got access to very affluent and very mobile demographics, global demographics,” Kontomerkos said. “When you add that together with Virgin, which also has a very significant, similarly positioned data base with all its businesses, I think you have a very powerful opportunity to drive some new visits and new customers into Las Vegas to this property.

“Experience-seekers all over the world will have the opportunity to partake in an extraordinary guest journey that only our strategic alliance can deliver.”

The Hard Rock is slated to close in February for an eight-month renovation, then reopen in late 2020 as Virgin Las Vegas, with Hilton Hotels’ upscale Curio Collection brand also in the mix as operator of the property’s 1,500 rooms and suites.

Plans call for a complete remodeling of the hotel, the 60,000-square-foot casino and entertainment areas, including the five-acre pool area. New nightlife venues and Virgin’s flagship restaurant, bar and lounge, Commons Club, will be added, along with 110,000 square feet of newly renovated meetings and events space.