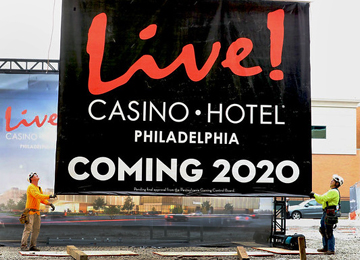 Cordish Companies’ Stadium Casino celebrates the topping-off of Live! Casino & Hotel Philadelphia, which will open next year in the heart of South Philadelphia’s Stadium District.

The location is sweet.

Stand at the epicenter of the site that next year will be Cordish Companies’ $700 million Live! Casino & Hotel Philadelphia, and you’re directly in front of Citizens Bank Park, home of Major League Baseball’s Philadelphia Phillies.

Look in another direction, and there’s Lincoln Financial Field, the stadium of the NFL’s Philadelphia Eagles. Across a parking lot from that is the Wells Fargo Center, the arena that’s home to the NHL’s Philadelphia Flyers and the NBA’s Philadelphia 76ers.

And near the Wells Fargo Center is the Xfinity Live! dining and entertainment center, developed through a partnership of Comcast, Inc. and Baltimore-based Cordish. It’s one of many Live!-branded venues run by Cordish, parent company of Stadium Casino, the venture that won Philadelphia’s second casino license. Cordish is partnering with Comcast to build an eSports arena as an extension of the Xfinity Live! attraction.

This is the heart of South Philadelphia’s Stadium District, which is typically mobbed with people, particularly on game day for one (or often two) of the city’s professional sports teams. To many observers, it’s the best site for a casino resort in the crowded Philadelphia region. Cordish officials feel it may be among the best sites in the country.

According to Joseph Weinberg, CEO of Cordish Gaming Group and senior partner of Cordish Companies, that’s why the company’s owners had their eyes on the South Philly location before 2012, when they joined with Parx owner Greenwood Gaming to jointly apply for the license (originally pegged for Foxwoods, which couldn’t arrange financing).

After years of appeals and court challenges by losing bidders for the license were exhausted, pre-construction and demolition work began in 2018. Cordish bought out Greenwood’s stake in Stadium Casino in November 2018.

“This is really one of the most spectacular locations in the country,” Weinberg told GGB News. “We have I-76, which dumps right into the site. We have two exits from I-95 that access the sports stadium district. It’s highly visible from the highways. There’s a tremendous residential population that’s complemented by a huge visitor population as well.”

Weinberg’s comments came just before he hosted Thursday’s topping-off celebration for Live! Casino & Hotel Philadelphia. The traditional ceremony observes the completion of a building’s superstructure. Dignitaries and company executives signed the final beam for the structure, which workers then hoisted into place to mark the construction milestone.

Weinberg and other Cordish executives celebrated—only a few months after ground was broken on the structure—along with officials of Gilbane Building Company, the general contractor managing the project, and several city and state government officials, including Philadelphia Mayor James Kenney, City Councilman Kenyatta Johnson and state Senator Larry Farnese.

At the press event, Reed Cordish, principal of Cordish Companies, recalled his early meetings with late Comcast Chairman Ed Snider in the partnership that created Xfinity Live!, in which he told Snider Xfinity Live! would only be the start of huge developments in the Stadium District.

“We certainly are beginning to realize that vision,” Cordish said. “It’s a great moment in South Philly. We are creating together what will be one of the great sports and entertainment districts not only in the United States, but in the entire world. This facility will be a premier hotel and gaming destination on par with any other facility, and a great complement to what’s happening in the Stadium District. People will visit from across the region and across the country, and when they do they will get to experience one of the great cities in America, Philadelphia.”

Cordish also gave a nod to the construction team for its hard, fast and efficient work, and Weinberg, in his remarks at the event, also praised the contracting team, along with city and state officials, for the speed with which the project is taking shape.

“This project just started going vertical this summer,” Weinberg said, “and to achieve this kind of progress in such a short period of time takes a tremendous partnership between the public and private sides, and between our construction crew and our neighbors here in the sports Stadium District.”

Zed Smith, chief operating officer for Cordish Companies, added in his remarks that such a public/private partnership is rare. “This is a very proud moment for us as a company,” Smith said. “This is the true essence of a public/private partnership. You have the state of Pennsylvania, the city of Philadelphia and a public company coming together and doing something very spectacular.”

State Senator Farnese and Mayor Kenney both lauded the jobs and economic impact the project is bringing to South Philly. It is creating approximately 2,000 new permanent direct and indirect jobs, and approximately 3,000 direct and indirect jobs during construction. Job opportunities will be available in every field, including hotel operations, finance, marketing, human resources, information technologies, food and beverage, facilities, security and surveillance, and casino operations. Hiring preference will be given to local residents first, then surrounding communities. Recruitment efforts will commence in early 2020.

The developer also is committed to supporting local, regional, minority, women-owned and veteran-owned businesses by providing them access to contract opportunities for a variety of goods and services.

“Projects like this, that support the union workers in our city and in the surrounding areas, allow people to maintain family-sustaining jobs,” said Farnese. “These jobs put food on the table for families, provide access to quality health care, and help get their kids through school.” He also commended Cordish for ongoing infrastructure projects and other projects to help the surrounding community.

“Soon, the new Live! Casino & Hotel will bring hospitality and entertainment to the growing sports complex,” said Kenny. “Now, fellow sports fans can book a hotel at the Stadium casino right near the games they plan to attend. Philadelphia’s tourism and hospitality sectors are thriving, and are a vital component to our growth and reputation as a world-class city.”

The project will generate approximately $2 billion in economic stimulus to the city of Philadelphia, along with $100 million in tax revenues during its first five years of operation, including $25 million to the Philadelphia School District.

A groundbreaking Community Benefits Plan with the city includes goals in minority and local construction and hiring initiatives, a commitment to living wages for all employees, more than $15 million in grants in the first 10 years to support improvements and enhancements to the local community, and the creation of a Community Advisory Committee.

“A big measure of our success is how we positively impact the communities where we do business,” said Weinberg. “We have an unprecedented program in place with the city of Philadelphia that will bring meaningful opportunities to the people, businesses and organizations that make Philadelphia the vibrant city we are so proud to call our new home. Just as one example, we are well on our way to achieving over 50 percent participation in the construction of this project with minority and women-owned businesses.”

“One of the things we’re always proud of—and this is part of our DNA, it’s not a corporate line, it’s who we are—is embedding ourselves within the community,” Rob Norton, president of Cordish Gaming Group and Live! Casinos, told GGB News. “If you recall, before Live! opened our casino in Maryland, there was a lot of angst and concern about what the casino would do to the community. Almost every one of those detractors is now a supporter.

“We’re real people; we’re a family-run organization. We believe in community, and we will be part of the community as we stand this process up, and I expect the same kind of results we had in Maryland.”

In this case, Cordish is fitting into the community with a property that could be a category-killer in Pennsylvania. “This is going to be by and far the best-in-class facility in the region,” Weinberg told GGB News. “We’re the only one in the Philadelphia market that has a hotel, and this is going to be a true sports, entertainment and gaming hospitality resort destination.

“What is one of the things people in this country love most? Sports. And they now have the ability to come to any major-league sporting event, to be able to stay overnight in the casino hotel, dine in one of dozens of restaurants in the district, and then get up and do it again the next day. It’s really going to be a one-of-a-kind opportunity.”

“There are literally millions of people and hundreds of events that bring people to the Stadium District,” added Norton. “And that’s beyond the draw that we’ll create. It’s an opportunity to really cross-merchandise between all these different incredible entertainment facilities, and maximize everybody’s results.”

Live Casino & Hotel Philadelphia is slated to open in the fourth quarter of 2020. Meanwhile, Cordish is about to break ground on Live! Casino Pittsburgh, in a former anchor department store of the Westmoreland Mall outside that city. Weinberg says the operator will cross-market between the three facilities, with a single customer-reward system that will give players points that transfer among the three properties.

“We are operating in two premier locations now, and with the Pittsburgh facility, it’s three great cities we’ll be opening in,” said Norton. “We anticipate this is going to be highly sought after as far as being able to go between the three facilities, and being able to experience all the nuances of the Live! brand.

“We’re extremely pleased with where we are, and our opportunities going forward, and building the quality of facility that we are in the process of building makes it that much better.”