HomeThe ShuffleLiverpool, Man City Battle It Out for EPL Title

Liverpool, Man City Battle It Out for EPL Title 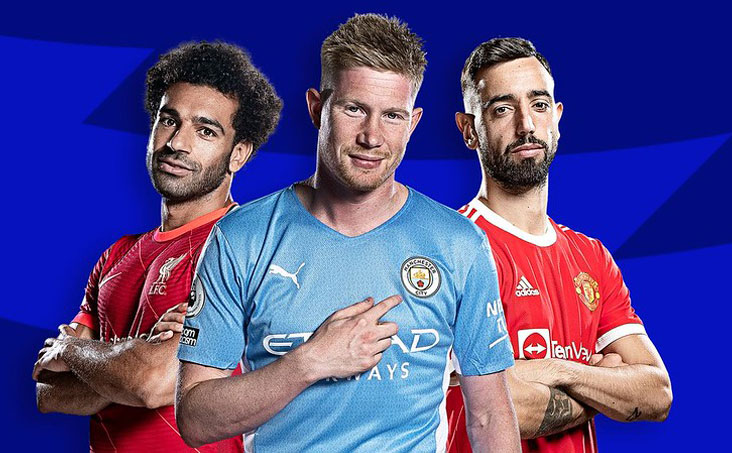 The English Premier League looks like a two-team race for the title, while other teams are trying to avoid relegation.

Early in the season, it looked like three teams would challenge for the English Premier League Championship. Chelsea was atop the EPL, followed by Liverpool and Manchester City.

Then Man City went on an 8-1-1 streak in its last 10 matches and distanced itself from Chelsea and Liverpool. The team from northwest England now has a six-point lead over Liverpool. And Chelsea is 13 points behind Man City. 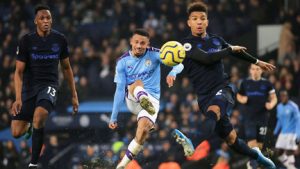 Now Man City is losing its grip on first place. It lost to Tottenham Hotspur on Saturday, 3-2, showing it was beatable. It had a 12-point lead in the beginning of February, but Liverpool has whittled it down to just three.

Man City Manager Pep Guardiola denies that the championship race is over. After the Tottenham loss, he told reporters it will be a battle through May. “We have to fight for every game and every game we are going to win we will be closer,” Guardiola said. “I said weeks ago we have to make a lot of points to be champions, and this is what we will try to do.

Manchester City plays Everton this Saturday and is -358 at PointsBet to bounce back from the Tottenham defeat. Everton, which is three points away from relegation, is +900 to pull off the upset.

Insure your Premier League One-Game Parlay at BetMGM. Pick your favorite showdown: Chelsea, ManU, Liverpool and more. Place the wager and get up to $25 back in Free Bets if you miss one leg. 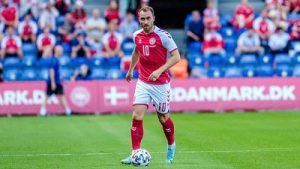 Brentford Manager Thomas Frank has long waited to put Christian Eriksen (l.) back on the field, and Saturday the great Dane will finally arrive, as Brentford faces Newcastle United.

Eriksen suffered cardiac arrest playing for the Danish national team during its game against Finland in June’s Euro 2020, collapsing on the field in the first half. Fortunately, medical staff performed CPR and ultimately saved his life.

The 29-year-old was playing for Inter Milan in Italy’s Serie A League, but couldn’t rejoin his team; the league doesn’t accept players who have an implantable cardioverter-defibrillator device. Brentford was able to sign him in January, but Frank was slow in bringing him back on the field.

The team played a friendly game with Scottish Premiership team Rangers on Monday, and Eriksen, in his first match since his collapse, had two assists in the 2-2 draw. Frank praised Eriksen and is excited to see him in EPL action Saturday against Newcastle United.

“At his best, Christian has the ability to dictate games of football,” Frank said. “He can find the right passes and is a goal threat; he also has very, very good set piece delivery, both from corners and direct free kicks.” Frank called Eriksen “a player you can find with the ball, who will come up with a solution to the problem in front of him. Christian will also bring experience of top-level football to the club. I expect him to have an impact in the dressing room and at the training ground.”

There might be a glimmer of hope for Watford as the team fights to avoid relegation to the Champions League. The team northwest of London currently sits in 18th place out of 20, with the last three teams sent down.

Watford hadn’t won a game since its 4-1 upset of Manchester United in November. It had an 0-9-2 record since that victory. One of the losses was a 3-0 drubbing by Norwich City.

A victory over Aston Villa, in which Watford was a +425 underdog, has given the team some optimism. But it might not last long. The team faces Manchester United on Saturday, with Man U looking for revenge from the embarrassing loss three months ago.

Watford is +800 to pull off another upset, while Manchester United is at -334.

Bet $50, Get $50 when you sign up to wager on English Premier League or any other sports at BetAmerica! Just create an account, make your $50 deposit, and play!

Get on the pitch with your favorite EPL teams this weekend. Sign up to wager at PlaySugarHouse, and your first deposit will be matched, dollar for dollar, up to $250.

Game On for MLB Prop