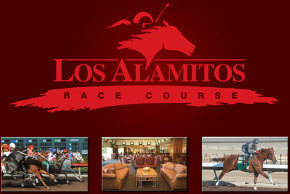 Los Alamitos has literally sported its own little niche for many years.

The California track has the distinction of holding four quarter-horse stakes races with purses over $1 million, more than any other track in the United States. It is known for offering races of a quarter mile or less.

The quarter-horse events are an all-out sprint, usually last about 20 seconds and require an excellent break. Blink and you miss the race.

“Los Al” has expanded its horizons. The closing of Hollywood Park prompted the track to lengthen its track and accommodate long races four years ago. And, now, look: the “little track that could” offers a pair of $300,000 races Saturday, December 9, the Starlet Stakes and Cash Call Futurity. Both are longer than 1 mile. That’s a monumental advance for this facility.

Being placed more in the mainstream helps the track’s stature with serious bettors, who often regard the short sprint races as a novelty they can’t handicap. They want events that reflect strategic positioning, turns and a distance length honest enough for the best horse to triumph.

“Los Al” also benefited from the pedigree of Art Sherman, whose horse California Chrome won the 2014 Kentucky Derby and Preakness Stakes. After Hollywood Park closed, Sherman moved his stable to nearby Los Alamitos.

Another pleasant addition for bettors is the emergence of Tampa Bay Downs. This is a fun track for many reasons, including the fact that speed horses usually do well. Any long shot placed near the lead coming for home here has an excellent chance to win or fill out a well-paying exacta, trifecta or superfecta. And, because the track runs many maiden and claiming races, legitimate long shots can figure into the picture. Low-level maiden and claiming events feature horses that take turns beating one another and who can benefit from a recent equipment change, better rider or recent workout.

Tampa loads up December 16 with the Ocala and Marlon County Stakes, each worth $125,000. The track runs predominantly on weekends until January, when it adds a Wednesday calendar.

And, three cheers for Remington Park in Oklahoma City. It showcases the $400,000 Springboard stakes December 17, augmented by two additional races each worth $100,000.

The NFL: Who Needs It?

That’s the important mantra guiding gamblers in the final four weeks of the regular season.

Take the Philadelphia Eagles, 0-1 in the midst of three straight road games. If they need to beat Oakland and Dallas in the final two weeks to secure home-field playoff edge, they figure to blow through those teams. If not, watch for benched regulars and a betting quagmire.

Another element is the line of demarcation between haves and have-nots. The hottest “haves” are New England and Pittsburgh in the AFC; Philadelphia, Minnesota, Los Angeles Rams and New Orleans in the NFC. If they oppose non-playoff teams, traditionally these types have covered the spread.

Line of the year… the Texans getting five and a half points from Tennessee last week after beating that team by 43 points earlier in the year! And, the line was right: they lost by 11. That’s what happens when one big player, in this case Deshaun Watson of the Texans, gets injured.