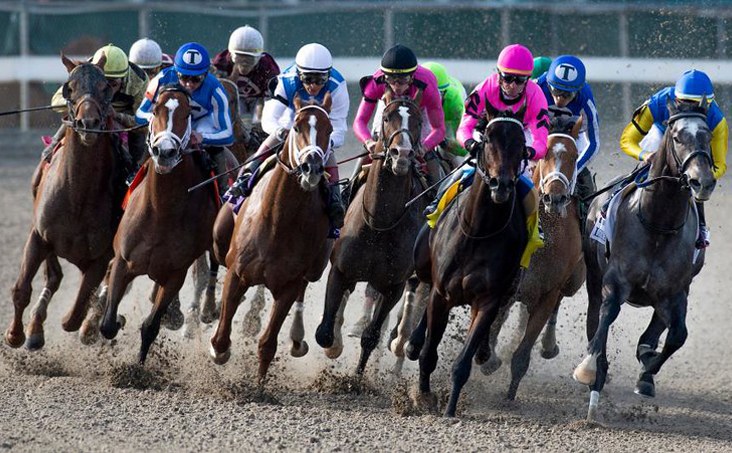 You don’t often see a Kentucky Derby prep where three favorites tangle for the third time in as many months. That’s this year’s $1 million Louisiana Derby.

You don’t often see a Kentucky Derby prep where three favorites tangle for the third time in as many months. That’s this year’s $1 million Louisiana Derby (G2) grudge match.

Mandaloun is your 8-5 favorite, back after winning last month’s Risen Star Stakes (G2). When he stands in Post 6 for Saturday’s Louisiana Derby, Mandaloun can look to his right and see Midnight Bourbon (5-1), who beat him in January’s Lecomte Stakes (G3).

To distill this to its essence: the 108th running of the 1 3/16-mile Louisiana Derby—the marquee race of Fair Grounds’ meet—is a grudge match between three good horses who spent the first two months of 2021 playing can-you-top-this.

If you’re scoring at home, both Mandaloun and Midnight Bourbon won one race apiece and finished third in the race they didn’t win. Proxy, meanwhile, finished second in both. 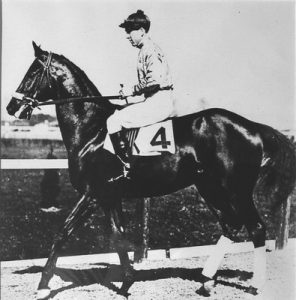 Before we get into Fair Grounds Louisiana Derby Grudge Match 3.0 (and the 100-40-20-10 Derby points up for grabs), a little history is in order.

Dating back to 1894, the Louisiana Derby is one of the oldest Derby preps in the country. In 1923, Black Gold put this race on the Triple Crown map, winning in New Orleans, then capturing the Kentucky Derby by a half-length.

Since then, Funny Cide (2003) and Country House (2019) have graduated from the Louisiana Derby to the Churchill Downs winner’s circle. Funny Cide won the Preakness two weeks after the Louisiana race. Country House won in Kentucky after Maximum Security was disqualified for interference at the finish; the champion retired with a foot ailment shortly thereafter.

We begin with your favorite: Mandaloun. The Brad Cox-trained son of super-sire Into Mischief rebounded from his subpar third at odds-on in the Lecomte with a clutch victory in the Risen Star. Cox took a pragmatic view of the Lecomte, realizing the race wasn’t as bad as it first appeared.

“You have to keep in mind it was his first start around two turns and first start in a stakes and he was a little bit wide the entire way,” Cox said. “I think he got a lot out of the race and moved forward off it. From a physical standpoint, he looks like he’s continued to develop.”

Cox aided that development by adding blinkers to Mandaloun during his training for the Risen Star. What followed was a more mature, serious colt who seized the lead from Midnight Bourbon in the stretch, then turned back Proxy’s late charge.

The 50 Derby points Mandaloun earned from the Risen Star guaranteed him a spot in the Derby. He currently sits at 22-1 on Circa Sports’ Kentucky Derby Futures Board, 16-1 at William Hill Nevada.

“More than anything, it was just the experience of having the race going two turns under his belt,” said Cox, who won this race last year with Wells Bayou. “I think the blinkers did help out. (Jockey) Florent (Geroux) immediately made a comment after the race. Much more focused in the post parade, more focused on his job.”

Bet on TwinSpires.com for the best horse racing promotions. Earn a $200 cash bonus when you sign up today! 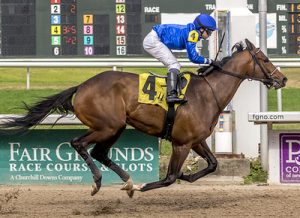 Maybe blinkers will help Proxy finally find the winner’s circle. The son of Tapit and multiple Grade 1 winner Panty Raid will add them for the first time, which should lower the blood pressure of trainer Michael Stidham. Proxy’s never finished worse than second in five races, but his attention deficit disorder cost him the Risen Star. Coming out of the far turn, he just checked out and surrendered the lead to Mandaloun.

Proxy managed to make a race out of it, nearly catching Mandaloun. But Stidham had seen enough of Proxy’s ADD escapades for one meet. He added the blinkers, and Proxy responded with three solid workouts, including a 47-second, four-furlong bullet Feb. 26. Proxy is 40-1 at Circa, 45-1 at William Hill.

“There were just a number of reasons why the blinkers were added,” Stidham said. “If you look at all of his races here at the Fair Grounds, in every race, you can kind of see him doing a little erratic stuff, whether it be shying away, drifting out or losing focus like he did in the Risen Star. You can’t win Kentucky Derbies or Louisiana Derbies by doing that.”

That brings us to Midnight Bourbon, who not only reacquaints himself with Mandaloun and Proxy but Rightandjust, who took him on a fast opening quarter-mile and half-mile in the Risen Star. That explains how the Tiznow colt tired at the top of the stretch.

Yet even with that tactical mistake—likely made in an effort to repeat his gate-to-wire Lecomte victory—Midnight Bourbon finished third by less than two lengths. He hasn’t missed the board in six starts (2-1-3) and is 60-1 at Circa and 45-1 at William Hill to win the Derby. The key for jockey Joe Talamo is to not engage Rightandjust out of the gate again – a tough ask, especially if nobody else takes him on—and let the horse’s stalking style do the trick.

“I’ve always thought those three were very serious 3-year-olds, not just at the Fair Grounds, but they are as good a prospect as you want to be around and I don’t think they’ve done nothing to change anybody’s opinion of that,” Midnight Bourbon’s trainer Steve Asmussen said. “The addition of blinkers on the one (Mandaloun) and Proxy has been consistent with the pedigrees they have. All three of them are capable, but at this point of your 3-year-old year, you either get better or you get beat. You’ve got to improve. What you’ve done is not going to be enough.”

Bet $50 and get $50 with your first sports wager at BetAmerica.com! Check out all today’s events and get in the race.

The Louisiana Derby grudge match will be an exciting race and may just produce another Triple Crown winner. As we head into the Run for the Roses, follow our expert analysis right here at iGamingPlayer.com! Dawn Harris knows her horseflesh.