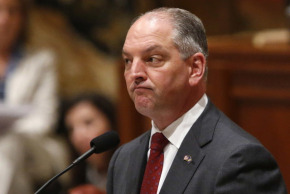 Previously Edwards said he most likely would sign the riverboat casino legislation. His spokesman, Richard Carbo, said Edwards would review the measure before making a final decision.

SB 316 would authorize the state’s 15 riverboat casinos to move within 1,200 feet of their current river locations as long as they can demonstrate some “economic development” justification to the Louisiana Gaming Control Board.

The bill’s supporters cited safety concerns as a major reason for moving to land. They said two locations in Baton Rouge on the Mississippi River are in particular danger. State Rep. Terry Landry stated, “It’s not a matter of if, it’s a matter of when, we are going to have a catastrophe out there.”

The measure also would eliminate the 30,000 square foot limit on gaming floor space and replace it with a cap of 2,365 gambling positions. The bill’s sponsor, state Senator Ronnie Johns, said riverboat casinos could increase their gambling positions whether or not they move ashore. Currently the Golden Nugget in Lake Charles, the state’s newest casino with 2,152 positions, comes closest to the proposed new limit. According to state gaming control board figures, the state’s 15 riverboat casinos now offer 21,223 gaming positions; the proposed cap would allow 35,475 positions.

The legislation also removes the requirement that riverboat casinos have an operating paddlewheel, and it also allows them to conduct four gambling tournaments per year, for a maximum of 14 days each.

Louisiana’s four racetrack casinos also could benefit from the bill, with the House voting 69-19 to change gambling space limits from 15,000 square feet to 1,632 gambling positions. Currently there are 4,461 gambling positions at the racinos, according to the Gambling Control Board; the new cap would allow 6,528 positions. The racetrack provision has to go back to the Senate for another vote.

Also awaiting Edwards’ signature is House Bill 484 which would legalize fantasy sports gambling through online sites such as DraftKings and FanDuel. The bill would exempt paid-entry contests from being defined as “gambling,” and instead would consider them “gaming,” replacing existing laws that consider DFS to be illegal.

If the governor signs the bill, voters in each of the state’s 64 parishes will decide in the November 6 election if DFS will be allowed there. If a parish votes against it, people could not legally play the games on their smartphones or computers while in that community. However, if parishes vote to support DFS, additional legislation would be needed next year to set regulations and taxation, and the state Gaming Control Board would have to write the rules for how fantasy sports apps would be allowed to operate in Louisiana, which could become the first state to partially offer regulated fantasy sports gambling.

The potential for a patchwork regulatory environment in Louisiana raises numerous questions, including:

• How would the state handle licensing and taxation?

• Would licensing and tax revenue payments vary according to parish population or other variables?

• Would Louisiana be allowed to eventually enter into a “shared player pool” agreement with other states?

Possible voter referendums in Louisiana parishes demonstrate how DFS operators could be forced to get hundreds of licenses in a nation with only 50 states.

Another complication faced Caesars in Louisiana. The state Senate Revenue and Fiscal Affairs Committee recently voted 6-4 to advance to the full state Senate HB 553, which would give Harrah’s New Orleans a no-bid, 30-year extension of its operating license, set to expire in 2024. One day earlier the Senate Judiciary B Committee narrowly passed the bill, after approving amendments requiring Caesars Entertainment to pay at least 40 percent more–$1.2 billion over 30 years–in annual taxes to the state and city, to hire 35 percent minorities at the proposed new hotel and to move up the completion date from six to four years.

Under the amended bill, Caesars will spend $350 million over the next four years to build a 340-room hotel, upscale food court, new nightclub and a covered entertainment district on Fulton Street. Real said the work would create 600 construction jobs and 500 permanent jobs and generate millions of dollars in new tax revenue for the city and the state. He noted, however, Caesars only would make the investment if HB553 passes.

Harrah’s New Orleans’ business has been in decline for a decade. According to the Louisiana Gaming Control Board, in 2008, the casino’s best year, it had 5.7 million visitors and posted $419 million in gaming revenue, with $90 million going to the state from the 18.5 percent tax. In 2017, the number of visitors fell to 4.4 million, gaming win was $281 million and the state collected the $60 million minimum in taxes.

The decline seems to be continuing with gaming revenue last month at $24 million, compared to $35.1 million in April 2017, a 35.1 percent drop. The city of New Orleans issued a smoking ban in April 2015, but business at Harrah’s had been dropping prior to that.

According to a Caesars statement, “Performance of the casino is quite commendable given the circumstances over the last 20 years, including recovery from Hurricane Katrina, the national recession, the BP oil spill and the downturn in the oil and gas sector regionally. The competitive gaming environment is also simply different over that time with slots at the Fairgrounds and new casino development in Baton Rouge and Lake Charles, as well as Mississippi.”

Judiciary B Committee Chairman state Senator Gary Smith Jr. offered an amendment increasing Caesars’ minimum payment to the state from $60 million to $100 million per year, or 18.5 percent of the gaming revenue, whichever is bigger. This was part of the original 1992 legislation which later was reduced.

Another Smith amendment would require Caesars to make an upfront payment of $40 million as a condition for winning a renewal of the license six years before it expires. Caesars could not reduce other payments to offset the $40 million. Recently Caesars officials had offered a $21 million upfront payment but planned to offset that by reducing $21 million in other payments. A third Smith amendment would require Caesars to pay the city $6 million a year for “casino support services,” up from the current $3.6 million—another part of the original 1992 legislation which later was reduced.

Recently it was revealed that Las Vegas-based real estate investment trust Vici Properties has an option to buy Harrah’s New Orleans from Caesars, which would lease it back to Vici. Smith said, “We were all caught off guard. That then raised questions about how it would affect the state.”