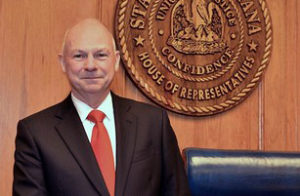 The 2019 Louisiana legislative session came and went and sports betting died from a failure to collaborate. Ronnie Jones (l.), chairman of the state gaming control board, said the industry is as much to blame as anyone else. He hopes any push in 2020 includes discussions with all parties.

During Louisiana’s 2019 legislative session, amendments to sports betting bill undermined its support and momentum, paving the way for its defeat in the House in June.

But Ronnie Jones, chairman of the Louisiana Gaming Control Board, said the “lack of a collaborative approach” provided legislators with a ready-made excuse to oppose it. In a recent interview with US Bets ahead of his appearance at ICE North America next May, Jones said there was plenty of blame to go around, including from the industry itself.

“They didn’t do what I think is absolutely essential in the discussion of proposed legislation: offer a united front. As the bill neared its eventual demise, the 20 casinos in the state diverged and even hedged on offering their support.”

Some operators wanted to wait for the perfect bill in a future session, others wanted to push through what was on the table or were even noticeably absent from participation in the process. The last-ditch amendments, including mandating use of official league data and the expansion of video poker terminals, complicated the issue at a crucial time in the process.

Jones hopes legislators offering a sports betting bill in 2020 collaborate with stakeholders and each other to gain feedback. Next year’s spring session begins on March 9 and will probably bring a new attempt, along with bills pushing for a parish referendum, a constitutional requirement for new forms of gaming.

Taxes are another impediment. Although any new proposal can establish a regulatory structure and provide for the manner and location of sports betting operations, they cannot cover any taxation or fee issues, adding further delays to legalization. Bills addressing taxes in the state are only considered every other year, an opportunity that was missed last summer.

Unless a special session is called, Louisiana will not be able to authorize—and implement—sports betting until 2021, Jones said.

In the meantime, “thousands of dollars are bet by Louisiana residents on all manner of sports day in and day out,” Jones said, often through illegal bookies or using unregulated online channels.

For Jones, the primary focus has always been on the indirect benefits to licensed locations and the communities where they are located, rather than direct profit.

“The addition of sports betting to Louisiana’s gaming landscape would, as originally proposed, drive business to casino locations where we believe visitors would buy food and drink, spend the night in a room, visit the spa and retail offerings, and perhaps even play a table game or two,” he said.

Despite figures from across the country showing that mobile/online is where consumers make a vast majority of wagers when there are available platforms, Jones recommends ushering in legal wagering at brick-and-mortar sportsbooks first, before opening the market online.

“I, on the other hand, have absolute confidence in mobile applications like those in New Jersey, but legislators simply aren’t there yet. And I will always be respectful of the opinion of those policy makers,” Jones said.