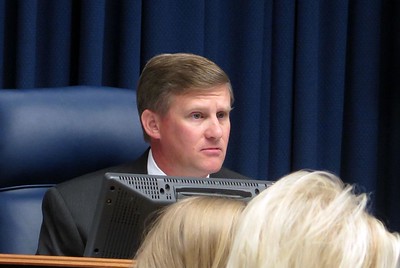 Louisiana lawmakers are deciding on which sports betting bill to approve, according to the bill’s sponsor Senator Barrow Peacock (l.).. The ones getting approved seem destined to be subject to a referendum, and if approved, the legislators must approve the details like framework and taxes levied by the state. It’s a grueling process.

Legal sports wagering may be headed in the same direction.

A Senate committee approved three amended sports betting bills, two going to the Finance Committee. But the bills call for a referendum and do not include a tax rate.

“We are again going down the path to ask people if they want sports betting,” said Senator Barrow Peacock, sponsor of bills on both daily fantasy sports and sports betting. “And if that’s the will of the people, and if we can’t pass the taxation, the people of Louisiana are going to be” upset.

Of Louisiana’s 64 parishes, 47 voted in favor of legalized fantasy sports in 2018. This time around, sports betting will be on the ballot if SB 130 gets through both chambers. Should voters in any parish approve sports betting, lawmakers would then be tasked with developing infrastructure, including rules for licensing, regulating, and taxing sports betting.

Senator Cameron Henry offered one amendment, which clarifies that the Louisiana Gaming Control Board will be the regulator. The amendment and bill passed the Judiciary B committee with little discussion. Henry’s bill is the most likely to gain traction. It asks residents if they favor sports betting and has no regulatory application or tax framework.

“We’re just going to pass the referendum bill, see if folks like it and next year, start the process of putting regulations in a bill that we’ll have months to work on rather than days or weeks,” he said.

But senators did discuss the two other bills—SB 378 and SB 332—initially similar bills that call for sports betting on riverboat casinos as well as at the Harrah’s Casino in New Orleans and statewide horse racetracks. The proposed legislation allows for on-site mobile sports betting and sets the minimum age at 21. The bills would also allow for betting on all professional, Olympic and collegiate sports, but not on eSports.

SB 378 was amended to match the language in the referendum-only bill and passed easily, before discussion on SB 332. Besides the tax issue, Peacock opened discussion about a Louisiana tax on casino promotional offerings. According to state law, promotions are taxed at 23 percent, meaning casinos are essentially taxed “on their own money” every time they send out a promotional voucher.

According to lawmakers, neither neighboring Mississippi nor Oklahoma has such a tax. SB 332 was ultimately stripped of the tax rate. The net result is that a package of three bills—none with a tax rate—will move forward.

The legislature is set to adjourn on June 1, meaning lawmakers are on a tight schedule. But there could be a special session this summer during which tax issues would be discussed. Tax bills can only originate in the House in Louisiana.

“If there is any way to jumpstart this industry again, it will be to allow them to issue promotional play at a much greater threshold, said Senator Ronnie Johns, who also pointed out that the state is down $100 million in revenue since shutdowns around coronavirus began in March.

If passed, the sports betting would become legal on June 10 of this year.

Lawmakers are likely feeling increasing pressure to legalize. Mississippi was among the first five states to offer legal sports betting nearly two years ago, and the coastline from the Louisiana border to Biloxi is dotted with casinos and now sportsbooks.