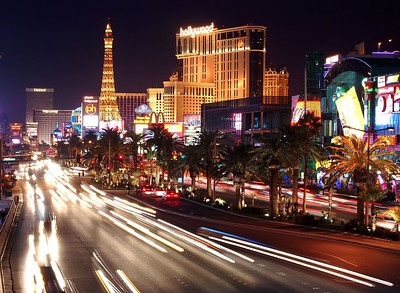 A new TV spot from the Las Vegas Convention and Visitors Authority features a person throwing a switch that rekindles the iconic “Welcome to Fabulous Las Vegas” sign, then the rest of the resorts up and down the Strip. It ends with the words that say it all: “Now Open.”

The Las Vegas Convention and Visitors Authority (LVCVA) wants the world to know Las Vegas is open for business. It ran a new television ad last week to get the word out.

Developed in conjunction with R&R Partners, the local ad agency behind the famous “What Happens Here Stays Here” campaign, the spot opens in a setting of darkness, with an individual throwing an industrial-looking power switch that rekindles the “Welcome to Fabulous Las Vegas” sign. That’s followed by a long view of the other resorts lighting up along the Las Vegas Strip.

“The Light,” as the ad is called, concludes with the words: “Now Open.”

The LVCVA, which has budgeted $65 million for advertising in the upcoming fiscal year, has encountered a number of setbacks in its zeal to get back to full-bore marketing mode. The agency was set to unveil its “What Happens Here Only Happens Here” campaign at the start of the year, with an array of messages tied to a TV ad that ran during the Grammy Awards. But everything went on hold with the death of basketball star Kobe Bryant and his daughter in a helicopter crash in California the day before the telecast.

“The Light” was ready to go when the two-month shutdown of Nevada’s casinos ended on June 4, but it was pulled when street protests erupted nationally that week over the death of George Floyd, an African American in police custody in Minneapolis.

“When we saw things throughout the country, saw what the national conversation was, we knew we needed to be respectful of what was happening,” R&R Vice President of Marketing H. Fletch Brunelle told the Las Vegas Review-Journal. “To us, the city has always embraced diversity with respect and sensitivity.”

The LVCVA contented itself with a 30-second spot shown on the agency’s website and on social media designed to counter public fears over the Covid-19 pandemic. Featuring images of openings and employees donning face coverings, the message was “We’re happy to see you again.”

“We’re doing what we can to ensure you can do everything without worrying about anything,” it stated. “Now let’s get back to the Vegas we know and love.”

“The Light” was slated to run nationally on network and cable channels that included ABC, CBS, NBC, BET, BET Her, E!, ESPN, NBA TV, TV One, the Travel Channel and digitally as part of a streaming deal with NBC.