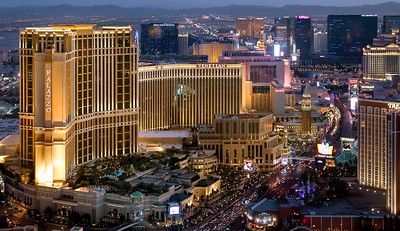 The casino giant Las Vegas Sands appears to be setting a course as a pure-play Asian operator. But the $6 billion asking price for its Las Vegas casinos, The Venetian and Palazzo (l.), together with the Sands Expo Center, is a steep one in the Covid era, leading analysts to suggest a REIT deal could be in the offing.

The news that Las Vegas Sands is in talks for a sale of its Las Vegas Strip resorts has analysts wondering about the $6 billion price tag in a U.S. gaming market ravaged by the Covid-19 crisis. They suggest that a REIT deal could be in the works instead.

The discussions, described last week as in the early stages, were revealed in an October 27 Bloomberg report confirmed by an unnamed representative of the Las Vegas-based casino giant.

The story came less than a week after LVS reported an operating loss of $610 million for the three months ended September 30 on net revenues that were down 82 percent to $586 million compared to the same period last year.

The loss was significantly better than the $985 million reported in the second quarter, but the fallout from the pandemic continues to wreak havoc with the company’s expansive operations on the Strip and in its principal markets of Macau and Singapore.

And with the latter two historically accounting for some 85 percent of group-wide revenues, which last year totaled $13.7 billion𑁋not to mention 90 percent of property EBITDA𑁋 it appears management has decided to jettison assets that were non-core even before the pandemic hit in order to marshal resources to the maximum for an eventual recovery in Asia. This would allow the company to pay down some of its $3.97 billion in debt, restart the payment of dividends, which were suspended due to the pandemic, and recycle capital back into its higher ROI holdings in Macau and Singapore, where some $5.5 billion worth of redevelopment and expansion work is under way.

LVS also was viewed as a leading contender to develop a destination-scale resort in Japan before Chairman, CEO and majority shareholder Sheldon Adelson announced earlier this year that the company was backing out for regulatory reasons. At the same time, Japan is considered one of the most potentially lucrative gaming markets in the world, and it has been suggested that LVS could revisit its stance should conditions improve or Tokyo emerge as a candidate for a casino.

Another rationale advanced last week is that the company wants to keep its powder dry for a casino bid In New York City, where it’s viewed as a leading contender.

It appears also that management sees a recovery on the Las Vegas Strip as a dubious prospect given the clouds the pandemic has cast over the future of the conventions and meetings trade, the market’s lifeblood and a business LVS largely pioneered and on which its Strip holdings, which include the Sands Expo and Convention Center, are heavily leveraged.

For analyst David Bain of Roth Capital Partners a sale works out to “even greater ability to invest in significant worldwide gaming assets, which could offer far larger and stronger returns than its current basket of Las Vegas assets.”

As Alidad Tash, a Macau-based consultant and former advisor to LVS, put it: “(Adelson) has three areas he makes money, Las Vegas, Singapore and Macau. If I have to sell an asset to pay for supporting the other two, if I have three horses and I need to kill one to feed the other two, it would be Las Vegas. It just doesn’t generate as much.”

At $6 billion, equating to an implied price for the properties of 12 times 2019 earnings before interest, taxes, depreciation and amortization, “a deal could make sense,” said Credit Suisse analyst Ben Chaiken.

But for who, was the question posed last week.

“The pool of potential buyers who can write US$6 billion cheques for any real estate asset is typically small, but post-Covid and with negative earnings (currently) we think it is even smaller and is coupled with much less favorable capital markets,” Bank of America Corp. stated in a memo.

One “possible scenario” advanced by the Sanford analysts, among others, would be “a sale-leaseback transaction with a gaming REIT” in which LVS would step away from ownership of the properties but conceivably would operate them in exchange for fixed rent payments to a real estate investment trust.

“The sale-leaseback structure has been commonplace for casinos in the United States for some time with, for example, MGM Resorts International, Caesars Entertainment and Penn National Gaming having done such transactions,” they noted.

“We are not sure how much interest from strategic buyers there might be given the high absolute price, other reportedly available assets on the Strip, and the unique positioning of the properties,” said Morgan Stanley’s Thomas Allen. “However, given the potential for a cheaper OpCo price through a sale-leaseback and historically relatively steady EBITDA, there could be other interest.”

Then again, it’s possible LVS may prefer to exit the U.S. market entirely with a view to rebranding itself, in a manner of speaking, as a “Chinese” company headquartered in Macau.

Looking ahead to the expiration of the six Macau casino concession in 2022, such a move could relieve the company of some of the baggage that may be weighing down the three U.S. operators there as a consequence in part of the political tensions that have arisen between Beijing and Washington since the Trump administration took office.

While these considerations may or may not be minor, being a “less American company” could see LVS as “more acceptable or tolerated,” as one industry commentator told Macau-based news site Inside Asian Gaming.

“It’s definitely not fun to be in a ‘storm eye,’ positioned amidst a variety of disputes/tensions, both domestic and foreign,” he said. “What used to be ‘advantages’ during normal times can be harmful when the circumstances have changed substantially.”

But even as an “Asia-pure play casino company,” the Sanford analysts believe the Las Vegas Sands name would remain.

As they put it, “Nostalgia is strong.”