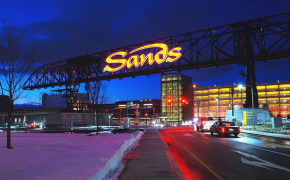 Name will be changed to Wind Creek Bethlehem

Las Vegas Sands Corporation announced that the company has entered into a definitive agreement under which Wind Creek Hospitality, an affiliate of the Poarch Band of Creek Indians of Alabama, will acquire the Sands Bethlehem property in Pennsylvania for a total enterprise value of $1.30 billion.

The tribe plans to change the name of the Sands to Wind Creek Bethlehem.

Las Vegas Sands Chairman and CEO Sheldon Adelson has been looking to unload the Bethlehem property since it became the first casino in the 29 years of the LVS empire to sign a union contract. Sands security guards ratified a three-year contract in February 2017, and the 146 guards remain alone among some 50,000 LVS employees in union representation. Adelson’s discomfort with the recently passed online gaming bill in Pennsylvania was also undoubtedly a factor.

Shortly after the union contract was signed, Sands Bethlehem halted its $90 million expansion and entered talks with MGM Resorts International to sell the facility, for the same $1.3 billion price tag. Those talks ultimately broke down—in fact, neither company even admitted they took place. LVS never completed its master plan for the property, built on the bones of the former Bethlehem Steel plant. The operator added a hotel and retail facility, but plans for an industrial museum and other uses of the former steel plant buildings ultimately were scrapped.

The Pennsylvania property will be the tribe’s first Class III operation in the U.S., and its first experience with operating table games, which have kept Sands Bethlehem near the top of Pennsylvania’s market in terms of revenue. Wind Creek Bethlehem will be the second commercial casino owned by a tribe. The Mohegan Sun Pocono is owned by the business arm of the Connecticut-based tribe, Mohegan Tribal Gaming Authority.

But like first proposed sale of Sands Bethlehem, this buy is the second attempt by Wind Creek to enter the commercial gaming industry in the U.S. The tribe had reached an agreement to buy the Margaritaville Casino Resort in Bossier City, Louisiana last year. But when the owners of Margaritaville weren’t able to discharge a licensing agreement with the Jimmy Buffett-led company, the deal collapsed.

Even though Sands Bethlehem wasn’t a core asset for Las Vegas Sands, Adelson says he’s proud about what his company accomplished there.

“Sands Bethlehem has become one of the leading regional entertainment and gaming destinations in the United States, and we are extremely proud of the positive contributions the property has made for Bethlehem, the Lehigh Valley and eastern Pennsylvania,” Adelson said in a statement. “We are pleased to have built a strong foundation that can be the basis for the property’s future success, and more importantly, we are proud to have delivered on our promise of bringing thousands of good-paying jobs, generating significant economic impact and revitalizing a site of sentimental and historical importance.

“I’m grateful to each and every team member who has represented us so well, and I know the hard work and dedication they showed us will continue in the years to come.”

“The quality of the property and dedication of the team members to genuinely engage with customers was evident from the first time we visited the property,” said Stephanie Bryan, tribal chair and CEO of the Poarch Band of Creek Indians. “The addition of this fantastic team and property to our portfolio furthers our desire to secure a long and prosperous future for our tribe.

“We look forward to working with our new team members and the community to cement Wind Creek Bethlehem’s position as the premier entertainment destination in the northeast. We are proud of our ability to become valued partners with communities surrounding our Wind Creek Hospitality properties.”

“We’ve become an important regional entertainment destination because of our commitment to our customers,” Carr said. “That’s not going to change regardless of what the sign on the top of the building might read. I’m confident our entire team will provide a smooth and seamless transition for new ownership while at the same time maintaining the strong level of guest service for which we have become known.”

Las Vegas Sands Executive Vice President and Chief Financial Officer Patrick Dumont said that while many options exist for the use of the sale proceeds, the most likely use would be consistent with the company’s long-held strategic direction when it comes to deploying capital.

The purchase gives Wind River an entrée into the iGaming business as well since Pennsylvania recently approved a law allowing online wagering. This might also have been a catalyst for the sale since Adelson has long been known as an opponent to online gaming in the U.S. and there were doubts whether Sands Bethlehem would participate.

Another factor are the 10 “mini-casino” licenses currently being auctioned off one at a time. Sands Bethlehem had reportedly won the third auction two weeks ago, but the proximity of the site to territory claimed by another casino invalidated the win. It’s unclear if the company has eyed other sites in the state still yet to be auctioned.

Wind Creek was advised by Innovation Capital, who called the purchase the largest acquisition of a single casino property outside of Las Vegas or Atlantic City.

Wind Creek Hospitality said it expects to fund the acquisition with a combination of existing cash on its balance sheet and new debt financing. Credit Suisse has provided committed financing for the proposed transaction. Wind Creek Hospitality anticipates that the additional cash flow resulting from the acquisition will allow it to pay down debt on an accelerated basis after closing.

Jefferies analyst David Katz was lukewarm on the transaction, calling it a positive for LVS but maintaining a “Hold” rating on the stock with a price target of $79. “Given the company’s prior efforts to sell the property, increasing competition in the Northeast, and Pennsylvania’s recent legislative rulings, we believe the announcement is modestly positive for the shares but does not alter our neutral stance on the shares,” Katz wrote.

John Cunnane, a Wall Street gaming and leisure analyst for Stifel, has concerns that Wind Creek can succeed in Pennsylvania, given their limited experience outside of Class II gaming in Louisiana.

“This is jumping into the pool at the deepest end,” he wrote. “This is a big acceleration. They didn’t buy Mount Airy. They bought Sands Bethlehem.”

The closing of the transaction is subject to regulatory review and other customary closing conditions, and will most likely take at least one year to complete.