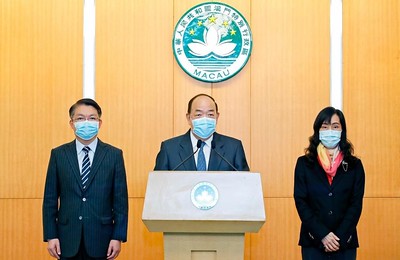 A disastrous first quarter looms for gaming in hard-pressed Macau, which last week reported its 10th case of the potentially lethal coronavirus, the first of a casino employee. As a result, Macau casinos have closed for at least two weeks, and probably longer, by the order of new Chief Executive Ho Iat Seng (l.). The shockwaves are likely to be felt in casino markets across the region, as travel by Chinese will be curtailed for several months.

The Macau government’s decision last week to close the territory’s 41 casinos could hammer first quarter gaming revenues by 50 percent𑁋and it could get worse. If the potentially lethal coronavirus continues to spread, the 15-day shutdown could be extended.

Either way, 2020 promises to be “awful” in the early going, said analysts at brokerage Sanford Bernstein.

“Assuming only a two-week shutdown followed by some soft business resuming in late February and March, Q1 could show GGR y/y decline of 50 per cent,” the firm said in a client note issued in the wake of the closures. “If casinos were to remain closed for the rest of Q1, GGR would show a y/y decline of over 70 per cent.”

Macau Chief Executive Ho Iat Seng announced the shutdown at a February 4 press conference after health officials confirmed that at least 10 residents of the self-governing Chinese territory had contracted the SARS-like respiratory illness, two of them employed by casinos, though not on the gaming floors.

Government offices also have been closed, except for “urgent services,” as have schools, nightclubs, cinemas and theaters in the city of 600,000 residents.

“This is not a holiday,” Ho said. “It’s not for you to go out, go to gatherings, go jogging or do exercises, it’s not for this, but for people to stay at home.”

Macau’s casinos have been closed only once before, in September 2018, in response to Typhoon Mangkhut. It lasted for a relatively brief 33 hours, but cost the industry an estimated US$182 million.

The government said last week it is not considering closing the border crossings from China, although hours at the main Barrier Gate checkpoint have been reduced, and bus and light rail service has been cut back.

In any event, visitation from the mainland, the bread and butter of the casinos, has slowed to a “trickle,” Sanford Bernstein said, after the central government halted group tours and stopped issuing individual visitor visas, and Hong Kong suspended ferry service to and from Macau.

It’s considered that the two-week closure may be longer by many observers. Even Las Vegas Sands President Rob Goldstein speculated, “It could be two weeks, it could be two months.”

It’s believed the virus first appeared early in December at a wet market in the south-central city of Wuhan in Hubei province, carried most likely by one or more of the wild animals sold there. Wild animals are popular fare in China, and are sold alongside domestic poultry and livestock in markets across the country.

According to news reports, the disease began to infect workers and shoppers at the market almost immediately. Medical personnel quickly raised the alarm, but initially local officials refused to act, fearful in no small part of censure from Beijing. Thus, a critical period of several weeks passed that allowed the contagion to spread. The situation was made worse by the fact that, by the time the epidemic was officially acknowledged and the central government began to mobilize to treat and contain it, the weeklong Lunar New Year had arrived. It’s China’s busiest travel season, and it occurred as the contagion rapidly spread throughout Hubei and beyond.

As of last week, mainland officials had confirmed more than 35,000 cases nationwide, over 700 of them fatal, with most of the deaths to date occurring in Hubei. Outside China, more than 270 cases have been confirmed, most of them in East and Southeast Asia, with Thailand reporting the most infections as of last week. Twenty-eight cases have been reported in Europe, 16 in North America. The World Health Organization has declared the virus a “public health emergency of international concern.”

Hong Kong, Macau’s much larger sister city, reported its first fatality last week, adding urgency to calls across the city of 7 million to close all borders with the mainland, a move the local government has resisted.

The fatality was the second outside mainland China, the first occurring in the Philippines, where the victim was reported to have visited Wuhan. The Hong Kong victim had not been to China, however, and local person-to-person transmissions have been reported elsewhere, including in the United States.

“There could be invisible chains of infection happening within communities,” Dr. Chuang Shuk Kwan of the Hong Kong Centre for Health Protections told the South China Morning Post last Wednesday. “We are not ruling out a large spread (of the virus) in the future.”

In Macau, where extended New Year celebrations normally find the casinos packed wall to wall with gamblers, January gaming revenue took a hit of more than 11 percent year-on-year as visitation plummeted 78 percent overall, and by 83 percent from China, the industry’s principal feeder market by far.

Gaming is the main driver of the city’s economy and its largest taxpayer, “so this year’s economy will be in the red for sure,” Ho said. “Income in other sectors will be very little in terms of taxes. Plus, we’re preparing for tax relief measures as a support measure for people at this difficult time.”

The position in China currently is that the coronavirus won’t prove as deadly as the 2002 epidemic known as SARS (Sudden Acute Respiratory Syndrome), a similar coronavirus that also originated in the country and killed almost 800 people worldwide before it subsided, costing the global economy an estimated $33 billion.

Analysts for S&P Global predict the crisis will stabilize by April. “The economic hit for China will be felt most by industries exposed to household spending, especially activities that take place outside the home,” they wrote last week.

In the meantime, dozens of countries are restricting travel to and from China, more than 20 airlines have suspended flights in and out of the country, and experts are forecasting a decline in world output of up to 0.3 percentage points as the world’s second biggest economy faces increasing isolation and disruption.

However this plays out, it’s not good news for gaming in close-in markets like Singapore, Cambodia, the Philippines and South Korea, where gamblers from China are the mainstay of everybody’s VIP rooms, and in Australia as well.

The U.S. is prohibiting entry of most foreign nationals who have been to China in the last 14 days, and is also quarantining all U.S. citizens returning from Wuhan. But a January report from Wells Fargo said U.S. consumer spending will “likely not be materially affected, assuming that the current episode does not become more widespread than the SARS outbreak.”

This bodes well for Las Vegas.

SunTrust analyst Barry Jonas, writing at the end of January, said high end baccarat play tends to be concentrated around events like the Lunar New Year, and while those results could take a hit, he said, “As it stands now, we see very limited potential direct impact.”

It isn’t surprising. MGM Resorts International CEO James Murren has said that baccarat makes up only 6 percent to 7 percent of cash flows on the Strip, so expectations surrounding the sector have been rather muted anyway.

Caesars and Wynn Resorts both have reported no notable impact to date on their Strip operations.

“If you look at room rates before the coronavirus was announced and (room rates) now, there hasn’t been a noticeable deceleration,” Jonas told the Las Vegas Review-Journal. “In some areas, you’ve seen rates accelerating for some periods.”

As for the three Las Vegas operators with exposure to Macau—Wynn, MGM and Las Vegas Sands—it might be safer to say the jury is still out. Yet, all three have been weathering a virus-sparked sell-off the last few weeks without significant ill effects, at least not so far. They even rebounded around the middle of last week with share price increases of 3.4 percent (Wynn), 3.6 percent (MGM) and 2.6 percent (LVS). The U.S.-listed shares of Hong Kong-based Melco Resorts & Entertainment were up 2.9 percent.

What seems likely is that investors have priced in the impact of the virus and are ready to hear more positive news in the weeks ahead.

“The announced closure of the Macau casinos for two weeks is not all that surprising and prospectively included in estimates and stocks,” Jefferies analyst David Katz wrote in a client note the day the Macau closures took effect.

Katz believes the impacts should be confined to the first quarter, after which things should start ramping up again.

As Sands President Rob Goldstein put it late last year, “The investment proposition in Macau, going back to the beginning, was always 1 billion or so people at your doorstep. We’ve always believed that the engine here would be, and should be, all those people across the border.”