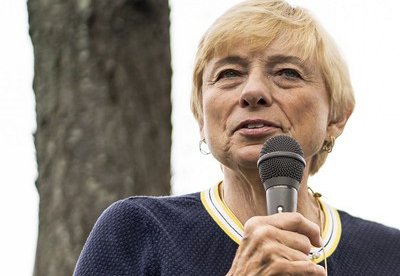 For four decades, a federal land settlement act has prevented Maine tribes from exercising the same sovereign rights as tribes in other states. The state’s recent review of the act could open the door to tribal Indian gaming, though Governor Janet Mills (l.) is concerned about sweeping changes.

In 1980, the tribal nations of Maine—the Passamaquoddy Tribe, the Penobscot Nation and the Houlton Band of Maliseet Indians—signed the Maine Indian Claims Settlement Act, agreeing to relinquish their claims to large amounts of land in the Pine Tree State. Just one tribe, the Aroostook Band of Micmacs, did not sign the agreement, but were included in its provisions.

It would be fair to say the act has never really worked for the tribes, especially when it comes to Indian gaming, used by hundreds of tribes to lift their members out of poverty.

The act was sparked when the Passamaquoddy and Penobscot Indians attempted to claim two-thirds of all the land in the state, based on the fact that the tribes and the federal government had never ratified any treaties. Under a subsequent agreement, the tribes were granted $81.5 million to buy about 300,000 acres.

According to a new report from the Task Force on Changes to the Maine Indian Claims Settlement Implementing Act, since the agreement was made, the tribes and the state “have been at odds … The common factor in these disputes has been disagreements over essential issues of tribal self-determination and sovereignty.”

The task force, established in 2019, has 13 members, including tribal chiefs and members of the legislature, which had already acknowledged that Maine tribes “should enjoy the same rights, privileges, powers, and immunities as other federally recognized Indian tribes with the United States.”

Lawmakers and Governor Janet Mills have been pushing for better relations between the state and the tribe, but last week Mills criticized some task force recommendations for their “sweeping nature.” adding that if adopted, they could result in “breeding confusion and extensive litigation.”

Among the report’s 22 recommendations are amending the act to:

William Nicholas Sr., chief of the Passamaquoddy Tribal Government of Indian Township, told GGB News, “The Passamaquoddy Tribe, like other federally recognized tribes in Maine, have been hindered and suppressed by the 1980 Land Claims Settlement Act, and the interpretations of language in the act by the state of Maine. Economic development in any sort, has been hindered for 40 years by legal interpretations by the state.”

Nicholas added, “Task force efforts, if passed, would recognize the rights of Maine tribes under federal law consistent with other tribes in Indian Country.”

Asked if he foresees the Passamaquoddy taking advantage of a revision in the act by building a casino, Nicholas said, “We would look into economic development options that suit our location, and need for employment.

Having the sovereign right to make that choice is the ultimate goal.”

Why did the tribes of 40 years ago agree to sign the act? “The 1980 act was signed as President Carter was leaving office,” said Nicholas. “It was stated that Reagan would not sign it, and there was a push to get it done. But shortly after 1980, it was realized how much the act hindered and oppressed our people.”

Commercial gaming is a significant source of income for the state. In 2018, Maine’s two casinos took in $144 million, of which $58 million went to state coffers. Voters approved the Hollywood Casino Hotel and Raceway in Bangor in 2005, and the Oxford Casino Hotel in Oxford seven years later; they are now owned by Penn National Gaming and Kentucky-based Churchill Downs, respectively. But voters have not been as positive about Indian gaming, and have turned down several initiatives over the years.

Last week, a spokesman for Penn National told lawmakers that jobs would be threatened by Indian gaming. Penobscot Chief Kirk Francis retorted that his tribe’s bingo operation was forced to close in 2015 because of competition from the commercial casinos.

“Penn National is not a constituent,” Francis said. “They are a special interest that is temporarily operating a casino in Bangor. When that casino starts to lose money someday, they will be gone and—like the many other corporate interests that have come and gone in this state—they will leave behind lost jobs.”

Also speaking to the committee was Michael-Corey Hinton, an attorney for the Passamaquoddy Tribe. He told lawmakers, “We’re not here for casinos. That’s not what we’re here for. We are here to restore our sovereignty and our ability to self-govern. Under federal law, that would include the right to game.”

In Aftermath of Merg