Man Behind Maine Initiative Steps From the Shadows 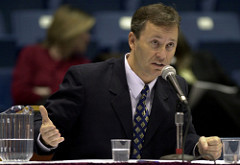 An initiative that could authorize a casino in York County Maine that only one man is qualified to build has made it to the November 7 statewide ballot.

The Horseracing Jobs Fairness campaign—now officially Progress for Maine—is under investigation by the Maine Ethics Commission, which is trying to find out the source of $4.2 million, much of which was used to gather signatures.

Shawn Scott is the only person who would be able to build the York County casino because of the way the initiative is written. In 2003 Scott successfully pushed an initiative that allowed a racetrack in Bangor to become the state’s first slots parlor. He wasn’t able to build the casino due to a series of ethics inquiries, but he successfully sold the land for $51 million to Penn National, which opened the casino that today is the very successful Hollywood Casino.

Some estimate that a license to operate a casino in York County would be worth up to $150 million.

Scott apparently hopes to replicate that success story in York County. Until recently, Scott laid low and allowed his sister, Lisa Scott, to the be the public face of the effort. Now, however, he has emerged into the light and will be one of two people in charge of the campaign.

Scott is an international gaming entrepreneur; whose holdings include several casinos in Asia. A concern of the ethics commission is the Progress for Maine has ties with China. The other principal is David A. Wilson, who has links to Bridge Capital, which Scott also runs and which is based in the Northern Mariana Islands, a U.S. commonwealth. The company also apparently has affiliations with Koa Overseas Consultants, Ltd., a Chinese firm.

According to a spokesman for Progress for Maine, New York-based company and a Nevada company are the only two companies involved. Wilson and Scott are listed as principals of those companies.

The Nevada company, Capital Seven, LLC, was the company Scott used in 2003 to find that casino campaign.

The Ethics Commission is concentrating its fire on $4.3 million that Lisa Scott originally provided, and which can be traced to Bridge Capital.

All this means is that the players remain the same. Only the public face of the campaign has changed to become Shawn Scott.

The commission was scheduled to meet last week to consider Scott’s objections.

Executive Director Jonathan Wayne wrote to the commission, “The documents requested in the subpoena for Ms. Scott are highly relevant to the commission’s investigation into the financing of the Maine initiative, and are not unreasonable or oppressive.”

Wayne added, “She argues that personal information and information that is irrelevant to the commission’s investigation should be redacted from the records produced under the subpoena.” He asked the commission to back his subpoena.

Similar objections were raised by Scott’s attorneys in July, when she was given 60 more days to gather the documents and provide a log of records that they want to be exempt from disclosure.

The effort to qualify the ballot measure has been controversial from the start in 2015 when the first attempt foundered after the Secretary of State invalidated more than half of the signed petitions. This led to another effort in 2016, which was successful. The new name for the political action committee, Progress for Maine, was registered last week.

The problems with the filing arose after the committee filed campaign finance documents that failed to disclose several companies, which were added later. The late filings could theoretically lead to a fine of $4.5 million, equal to the amount raised so far.

Several leaders of the legislature have also attacked the process. The attacks have been bipartisan, with the chairman of the Veterans and Legal Affairs Committee, which oversees elections, declaring that the initiative had exploited the referendum process.

The committee has considered putting a competing question on the November ballot.

Meanwhile Progress for Maine has hired the same consulting firm that worked for the Brexit campaign last year: Goddard Gunster. The campaign last week paid $80,000 to the Washington D.C. marketing firm, which specializes in social media and website development, but is also renowned for its involvement in controversial referendums, such as the campaign that resulted in Britain voting to leave the European Union. It claims to have won 90 percent of the campaigns it has worked on. One of those was to successfully fight the ban large soda containers that former New York City Michael Bloomberg fought for several years ago.

Gerry Gunster, the firm’s chief executive officer, compared the two campaigns last week in an interview with Maine Public: “People thought, 60 percent of them, that the country was heading in the wrong direction. In the United States that number was right about the same. That’s the same number in two different countries that change is going to happen. And it did,” he said.

One reason for bringing Gunster into play might be to counter the almost totally negative publicity that the initiative campaign has operated under almost since the beginning.

Meanwhile, opposition to the ballot measure: Question 1, is forming. One of the first to announce opposition was Churchill Downs. Followed by Penn National Gaming, which owns the Bangor casino, and the Christian Civic League of Maine.