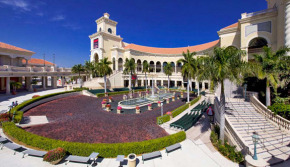 Racing kicks into high gear this month with major races, big cards, lucrative carryovers and an emerging snapshot of the year’s major players.

Florida’s Gulfstream Park launches the festivities Saturday, March 3 with a loaded card featuring nine six-figure races. The $400,000 Fountain of Youth Stakes highlights the menu, but the $200,000 Davona Dale and Mac Diarmida races, along with the $150,000 Canadian Turf and Very One events, provide a supporting cast. So do the Palm Beach, Sand Springs, Gulfstream Park Sprint and Herecomesthebride races, all worth $100,000. Each event by itself would normally garner betting interest. Together, they comprise a formidable card and a wagering wonderland.

These lineups underscore the growing concept of a track surrounding one stellar event with several strong ones, trying to entice major bettors to hone in on the entire card.

The month features top racing every weekend and concludes with a bang March 31 via the Florida Derby and the Dubai World Cup, which had been the world’s most lucrative horse race until it was surpassed by the Pegasus.

How times have changed. Without being on site, a bettor can wager on championship races, one after another.

Two weeks back, we told you about the ever-rising Gulfstream carryover Rainbow Pick Six. That starts the week at more than $1.5 million.

The Fountain of Youth provides another backdrop of racing interest Saturday. Its winner may graduate to the Florida Derby or Kentucky Derby. Gunnevera launched and completed a banner campaign here over the past several months. He won the Fountain of Youth Stakes at 4-1 last spring, finished seventh in the 20-horse Kentucky Derby, improved steadily throughout the year and showed up on the sport’s biggest stage, the $16 million Pegasus World Cup in January. There, he ran a respectable third to horse-of-the-year Gun Runner.

The Brooklyn Nets, as we highlighted here, remain a strong NBA bet against the spread despite being in the basement of their division. The Nets are 20-41, yet 28-19 versus the spread. The Chicago Bulls feature a similar dynamic at 26-24 against the number while being 20-40. Houston, San Antonio and Toronto are slightly above .500 as favorites, while Philadelphia has been the most consistent, 20-14, as a favorite.

In the NHL, you will usually find teams tightening defenses and the over-under for many games hovering around five goals as March kicks in the last full month of the regular season.