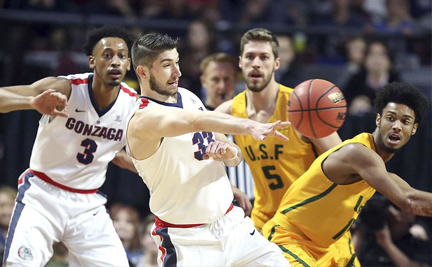 With football over and a month until the NCAA tournament begins, let’s take a look at which teams could secure the four top seeds, plus the last four in and out.

With football over and a month until the NCAA tournament begins, let’s take a look at which teams could secure the four top seeds, as well as the last four in and out in our March Madness Preview. 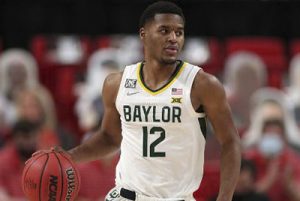 No surprise here. It’s hard to remember a point in this season when the Gonzaga Bulldogs weren’t at the top of the heap. The Zags are by consensus No. 1-ranked team in the country.

Powered by the trio of Jalen Suggs, Drew Timme and Corey Kispert, the team has been nothing short of lethal. Rivals trying to beat Gonzaga have found it all but impossible to even keep them within double digits.

Until proven otherwise, this is the best team in the country, and could stay undefeated all the way to the national championship game.

Gonzaga is on its own level this year as the nation’s top team. But the Baylor Bears have the second tier all to themselves. The Bears are their own type of special this season, and also remain undefeated.

Jared Butler is probably the best player in the country, arguably for the second year in a row. His increasingly unselfish style of play has this team looking very strong for the tournament. So I’d be shocked if Baylor didn’t make at least the Final Four. 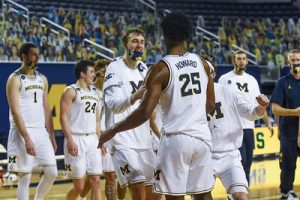 It’s been a month since the Michigan Wolverines took their first and only loss of the season, and they’re on a roll. Unfortunately, they’re not quite up to the dominance of the Zags and Bears, though an upcoming slate of ranked opponents should add some strength to this team’s schedule/record.

This is a very well-rounded team that should be able to make some real noise in the tournament this year, especially as a No. 1 seed.

Many fans and analysts have the Ohio State Buckeyes next on the list, and justifiably so. But I think the Villanova Wildcats are the clear third best team in the country, and therefore should receive this final top seed.

While they’ve cooled off lately, taking two of their three losses in their last four games, the Wildcats are so talented at multiple positions that not many teams will be able to neutralize them. I don’t see them losing any more games before the tournament’s opening tip, so they should be able to slide into this last No. 1 spot. 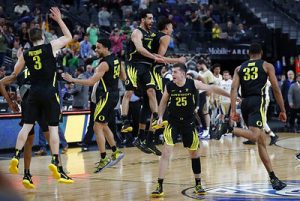 A recent skid of two straight losses tainted what has otherwise been an extremely impressive season for the Oregon Ducks. The Ducks are 12-4 and stand a great chance to win their conference. Obviously, if they do so, it would ensure Oregon’s spot in the dance, but I like them to advance regardless.

A lack of a signature win could hurt them, but their strong record and top two of Eugene Omoruyi and Chris Duarte should be enough to extend their season.

Try a One Game Parlay on pro football, soccer or the NBA at BetMGM.com! It’s a fast, fun way to make every play matter more.

The VCU Rams are another group that could win their conference and earn an automatic bid, in which case there’ll be no drama surrounding the team. If they don’t win, Nah’Shon Hyland is going to have to keep the team on his back and push them to an at-large bid. The Rams would need to go undefeated for the rest of the regular season, something that seems very possible.

I don’t like this team’s chances if they do make the tournament, but they seem likely to do so. 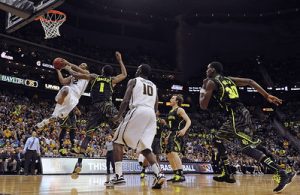 The Colorado State Rams haven’t posted a signature win so far this year. Without playing a single ranked opponent, they’ve put up an impressive 14-4 record nonetheless.

This type of team makes life hard for the selection committee, as they look strong, but just haven’t played anyone. Expect the Rams to enter the tournament as a very low seed, and enjoy their one game before heading home.

The St. Louis Billikens are on the outside looking in after a pair of recent losses that soured the committee on this team’s potential. But the team has multiple key games remaining, including matchups with a couple of other organizations on this list, VCU and Richmond. With two wins in those games, St. Louis would all but guarantee their appearance. With a split or especially two losses, this team can expect to stay home this March.

Get a 10% Bball Profit Boost at PlaySugarHouse.com. Use your Profit Boost every Monday on any basketball bet with odds -200 or greater!

While the Stanford Cardinal has played a tough Pac-12 schedule, its 13-8 record is not too convincing. They have too many losses to mediocre or bad teams to be considered. Stanford may need to win the conference or come very close if it wants a shot at this year’s tournament. 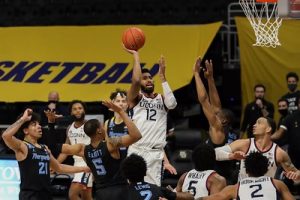 The UConn Huskies have had a rough go of it this season, with about half of their schedule postponed or canceled, resulting in a 9-5 record to date. In such a limited amount of action, a team needs to be near-perfect to stand out to the selection committee. The Huskies just haven’t done the job. They look to finish on the outside looking in.

The Syracuse Orange have a decent record (12-6) in a good conference (ACC). The problem is that they sit halfway down the conference standings, with no ranked wins. Their resume just isn’t as strong as it needs to be, and unless they win out, they aren’t looking too likely to advance to the dance. 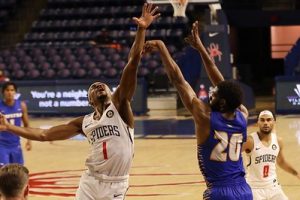 The Richmond Spiders are interesting, and of the last four teams on this list, the Spiders probably have the best shot of making the tournament. They sit at 11-4 and can boast an early season win against the then-No. 10 ranked Kentucky Wildcats. This team still has a tough four games remaining, and will need all four plus a strong performance in the A-10 to advance. Let’s see what the arachnids can do!

This final push for the tournament should be exciting, with so many teams trying to get in as many games as possible to boost their resume in time for Selection Sunday, March 14, with the Final Four set to be held April 3 and 5 at Lucas Oil Stadium in Indianapolis.

Keep an eye on these teams listed in our March Madness Preview, and don’t be afraid to ride them for the next month. Be smart and good luck!

Note on the Season:

According to ESPN, the NCAA will host its entire postseason men’s basketball tournament in and around Indianapolis, in a bubble-like format. All 68 teams will come to compete for the national championship at multiple venues in Indianapolis, Bloomington and West Lafayette.