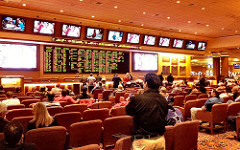 Two weeks ago, the American Gaming Association renewed its ongoing call for the legalization of sports betting in the U.S. by estimating that $10.4 billion will be wagered on the current NCAA basketball tournament—widely known as March Madness—with all but around $295 million of those wagers made illegally, with profits going to organized crime instead of state governments.

Early returns from Las Vegas sports books confirm the AGA’s predictions. The sports book at the South Point Hotel, Casino & Spa, one of the most successful in Las Vegas, show that bettors wagered as much in the first four days of the tournament as the entire amount bet on this year’s Super Bowl, according to CDC Reports.

CDC noted that a last-second three-pointer in the first-round game between Oklahoma State and Michigan, which meant nothing to the outcome of the game, swung the house take at South Point by six figures, in what was a huge weekend take for Las Vegas sports books overall.

The book at the South Point has become something of a national showcase for sports betting since longtime CBS and ESPN broadcaster Brent Musburger took up residence there earlier this year. Musburger hosts My Guys in the Desert, a daily two-hour show on the Vegas Stats & Information Network, from a glass-box studio in the middle of the South Point casino floor.

Despite this new showcase for sports betting—and the AGA’s ongoing campaign to lobby the U.S. Congress to repeal the sports-betting ban imposed by the Professional and Amateur Sports Protection Act of 1992 (PASPA)—the billionaire known as the “Oracle of Omaha” is advising to bet against a repeal for the time being.

Financier Warren Buffett, who correctly predicted the rise of daily fantasy sports, told Yahoo.com last week that he would “probably bet against” the legalization of sports betting in the U.S.

“If you don’t have a team in a game, it is definitely more fun to have five bucks on it with the guy sitting next to you, there’s no question about that,” Buffett said. “But I generally don’t think there’s a lot to gain by having a country where lots of people are going to be losers. If they’re making a bet with the guy next to them, that’s one thing, but if they’re doing it against a sports book, they’re going to lose money all the time. And gambling is addictive, so I’m negative on it.”