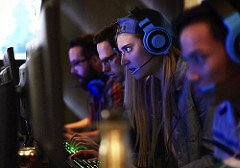 A bill introduced in the Maryland House of Delegates provides an outline for esports as an addition to sports betting legislation expected to be considered this year.

The bill, introduced by Del. Robin Grammer Jr., defines esports as a competition involving video games, including first-person shooters, real-time strategy games and multi-player online battle arenas in which players compete with each other. The bill requires that skill must determine the results of competition.

The bill is meant to separate esports video games from gambling statutes, with the participants themselves receiving prizes for winning in the competition.

This bill’s definition excludes allowing any gambling on esports competitions. However, passing a clear definition of the activity under Maryland law could set up lawmakers to add competitive gaming to the list of sports on which wagers are permitted in sports betting legislation, expected to be crafted this year in preparation for a constitutional amendment effort in 2020.

“Esports is a multibillion-dollar industry,” Maryland Del. Eric Leudtke, a bill cosponsor, said in an interview with the Associated Press. “We just need to catch the laws up in Maryland to where society is.”