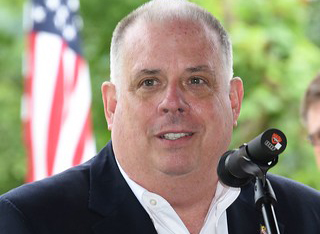 Maryland lawmakers have stripped much of the detail out of a sports betting bill in an effort to get a referendum on the November ballot. If the opportunity slipped by, supporters would have to wait until 2022. If approved by Governor Larry Hogan (l.), particulars will be added.

Faced with an early legislative adjournment due to the coronavirus pandemic, and a desire to get the sports betting issue on the ballot this year, the Maryland General Assembly on March 18 stripped the bill of major details so it sailed through both houses.

Both the House and the Senate overwhelmingly approved SB 4, which was stripped clean of everything from the tax rate to problem gaming funds to where sports betting could take place.

The law, SB 4, now awaits the signature of Governor Larry Hogan, according to SportsHandle.

The approved version the voters will pass judgment on includes the referendum language, a section about minority business, a provision that gives regulatory authority to the Maryland Lottery and Gaming Commission, sends revenue for public education, and calls for a study.

The parts removed centered on the proposed 20 percent tax rate on gross gaming revenue, application fees of $1.5 to $2.5 million, and the location of physical sportsbooks, including the possibility of allowing the Washington Redskins to operate a sportsbook should they choose to keep their field in Landover.

Virginia, also soliciting the team, likewise sent a bill to the governor with a similar provision that includes sports betting at a Redskins stadium in that state.

That Maryland only permits referendums in even numbered years added to the heightened sense of urgency to not sweat the details. If sports betting wasn’t placed on the ballot in 2020, according to the state constitution regarding gambling expansions, it would have to wait until 2022.

The referendum will read: “Do you favor the expansion of commercial gaming in the State of Maryland to authorize sports and event betting for the primary purpose of raising revenue for education?”

Maryland becomes the third legislative body to approve sports betting in 2020, joining Washington and Virginia, both passed in early March.

It seems the General Assembly was in a sprint to make sure the referendum would get on the November 2020 ballot.

Some industry onlookers say a referendum with no infrastructure backing it is a huge risk.

“In the legislative sausage-making process, someone needs to get a shipment out, but apparently forgot all the ingredients,” said Brendan Bussmann, of Global Market Advisors. “Voters may not approve sports betting without some of the details needed.

“I think they will be called back for special session, and I think it’s the tip of the spear, and this will get hashed out. You have to have the language ready to get on the ballot by August,” she said.

Voters should be entitled to know what they are voting for and the execution of it, said Brianne Doura-Schawohl, the legislative director for the National Council on Problem Gambling. “To strip the bill in its entirety, I think it says a lot more about what they are going to have to do to craft the bill later.”

“Typically voters on referendum questions will vote on what they are educated about. Operators are going to actively support seeing the referendum pass and the education and messaging to voters will be about the benefit of legalizing sports betting.”