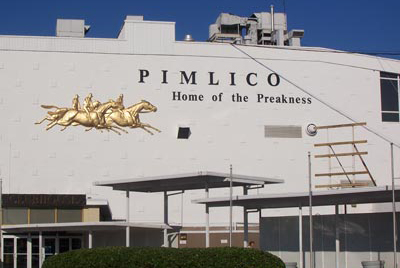 Maryland lawmakers have advanced a bill that would allow state voters to approve sports betting. A “yes” vote would bring the wagers to Pimlico Racecourse (l.) and Laurel Park, among other locations.

A key committee of the Maryland Senate voted unanimously last week to clear Senate Bill 4, which would put a sports betting referendum on the November ballot.

The bill cleared the Senate Budget and Taxation Committee by a unanimous vote, sending the measure to the Senate floor for a vote. If it becomes law, a positive vote from Maryland voters in November would grant nine sports gambling licenses.

Six would go to the state’s casinos. Pimlico Racecourse and Laurel Park, the state’s busiest horsetracks, would share a license. Sportsbooks also would go to the State Fairgrounds in Timonium and to a new stadium for the NFL’s Washington Redskins in Prince George’s County.

Each license would carry an upfront fee of $2.5 million, except casinos with fewer than 1,000 slot machines, which would pay $1.5 million. Licenses would be good for five years, with a renewal fee at 25 percent of the original cost.

“This is something that we hear Marylanders want,” said Sen. Craig J. Zucker (D-Montgomery), a member of the committee and the legislation’s chief sponsor, according to the news site marylandmatters.org. “This is something that they’ll have a chance to vote on come this next election. And it will make sure that we’re making sure that we’re doing what we can to invest in the future of Marylanders’ education.”

The inclusion of the Washington Redskins license is designed to keep the team’s stadium in Maryland. Its current stadium, FedExField, is in Prince George’s County, but the team has considered moving to the District of Columbia, where legal sports betting already has led the NHL’s Washington Capitals to plan a sports betting lounge at Capital One Arena, and Major League Baseball’s Washington Nationals are considering such a facility for Nationals Park.

The 19-page bill may well undergo further amendment. “We’ll hear from our friends in the back,” according to marylandmatters.org—a reference to the lobbying contingent present for the committee’s debate.

The measure now goes to the full Senate.