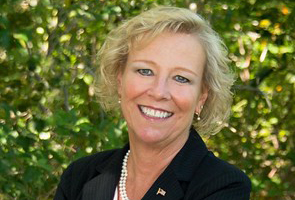 Rep. Susan Williams Gifford’s (l.) controversial bill in the Massachusetts legislature would lower the bar for investment to build a casino in the Bay State’s Region C.

A bill that would slash the investment required to build a Massachusetts casino is getting a mixed reception.

The bill, H 4070, introduced by Rep. Susan Williams Gifford at the behest of the Notos Group, would lower the bar in what is officially known as Region C. It would allow a second slots parlor in the state and open the gate for Notos’ proposed $300 million Wareham Park project.

Currently, the minimum investment required for a casino is $500 million.

Notos, led by a family of developers who built the Marina Bay complex and Granite Links Golf Club in Quincy, proposes a thoroughbred racetrack, slot parlor and baseball park, plus dining and a hotel. The 2011 law that expanded Massachusetts gaming only allows for one slots parlor, which is held by Plainridge Park Casino in Plainville.

The Region C license has never been issued, mainly because it’s appeared tied to the fate of the $1 billion tribal casino that the Mashpee Wampanoag tribe has fought to build in Taunton. That project has been stymied both in the courts and because the Trump administration rolled back the land-into-trust decision that was made under the Obama administration. This has left the southeastern part of the state unable to benefit from the economic stimulus of a casino.

The South Shore Chamber of Commerce has thrown its support behind the bill, if not the actual project proposed by Notos. President Thomas O’Connell and CEO Peter Forman wrote to Gifford, signaling their support.

Forman is a former minority leader of the House. Both he and Gifford are Republicans. The letter says chamber’s leaders are troubled that the region “is almost effectively blocked under current law from even considering a gaming option.”

Forman told GGB News, “We’re backing legislation that would allow the state to consider options other than a full resort casino. We have not endorsed any specific proposal that might be made to the state.”

Forman noted that the chamber is in a unique location geographically in terms of the three gaming regions. “We’re about 25 communities, covering the shoreline between Boston and Cape Cod, including a small section of Region C,” he told GGB News. “Our northernmost community is almost a Boston suburb, and we go to the Cape Cod Canal. If you got something in Southeastern Massachusetts, it could have some impact in our economic basin.”

He continued, “When the legislature set up the three gaming zones, they did it with full casino resorts in each zone and one slots parlor. Our chamber straddles Region C and A. The other two regions have the two casinos and a slots racing casino. It is looking like there won’t be a practical market opportunity for a full resort casino in Region C anytime soon.”

Forman added, “Our board endorsed the legislation that would allow the commission to consider other options, if we think that door should at least be open, and the region should be able to consider some options. If the door is open, I think there would be lots of proposals. The chamber has not endorsed any specific proposals and we think there will be several coming forward and we haven’t spent any time analyzing any proposals.”

The idea of introducing live horseracing “seems to have a little more potential value to the region, because there are lots of farms in the region and there is an agricultural spin to horseracing,” he added. “Whether it’s possible to have a sustainable horseracing industry, I would leave those in the industry to find out.”

Forman described the region’s economy as “fairly good right now, pretty strong. Housing prices are good, unemployment is very low. We do look to some future challenges as industries change. Obviously we’d like to see future growth, so we want to diversify our economy.”

The city of Wareham supports the bill. Officials say that it could give a shot in the arm to the town’s finances.

However, the senator whose district includes both Wareham and Taunton opposes the bill as not in keeping with the original intent of the gaming expansion legislation of 2011.

Speaking to GGB News, Senator Marc Pacheco said, “I believe passage of that piece of legislation would corrupt the system and the plans that the Massachusetts Legislature and governor put in place. We took a lot of time to study this issue, to look at what the implications were and what the market would be like in Massachusetts. Even though the market might be able to bear more, we decided there would be three region-based casinos and one slots parlor, which is in Plainridge.”

It’s wrong, Pacheco said, “to allow something that’s dissimilar to the other regions, that is significantly less in terms of the investment in the commonwealth and is legislation to benefit one developer: the Notos Group. It’s essentially that group that wants to see this accomplished, and they want to see it accomplished so they would be eligible to develop in Region C.”

He added, “Anytime you are doing something only for one developer— when you’re talking about the gaming industry—that’s very dangerous territory to be heading into. The question would be, why would you do that when the existing framework allows the region to have one destination-based casino?”

Asked about the assertions of those like the Notos Group who say the area is too saturated to support a destination resort casino, Pacheco noted, “When the gaming industry announces they’re going to build a casino, very rarely do a lot of the estimates come to pass. They’re usually more lucrative in terms of their vision rather than the reality.”

Nonetheless, he said, gaming has produced “significant job growth, significant tax dollars with the casino in Springfield and the Encore in Everett and in Plainridge.” He said it’s in the interests of existing casinos in Massachusetts, the Foxwoods and Mohegan Sun casinos in Connecticut and the two Rhode Island casinos “not to have an additional

destination based casino in Region C, but that’s not in the interest of the commonwealth of Massachusetts.”

The state’s interest “has always been has been using gaming as only one tool for an economic development plan, and having a destination based in Region C was part of that plan,” he said.

In a March 5 interview with the Boston Globe, Pacheco said, “The most effective way to assess market saturation is to simply use the process in place. Skepticism about the industry’s viability could be settled very quickly—when the timing is right—by putting Region C out to bid.”

The senator said he’s frankly surprised that the legislation was even introduced, given the level of support for it. “I’m surprised there were people willing to file this legislation. I would have said we were hundreds of miles away from such a bill,” he said.

Another player’s interests are also rubbed raw by this bill—Mass Gaming & Development, a subsidiary of Rush Street Gaming, owned by billionaire Neil Bluhm, whose proposal for a casino resort at the Brockton fairgrounds was turned down by the Massachusetts Gaming Commission several years ago because commissioners feared it might interfere with the development of the Wampanoag $1 billion First Light Casino, which at that time was still considered very viable.

Joe Baerlein, a spokesman for Mass Gaming Development, told GGB News that the Brockton proposal is still very much alive.

“As you may know on this project, (the Notos Group’s) total investment is $300 million; the gaming legislation has a minimum of $500 million investment for a full-scale resort and casino. Right there, they’re not in compliance with the law. Our view is that, if you want to be a bidder in Region C, you should conform to all of the requirements. And if they don’t, they don’t make the cut.”

AC to Icahn: Tear Do