Massachusetts Could Take up Sports Betting 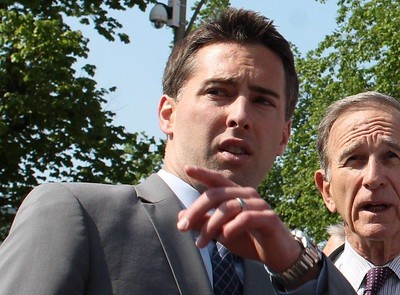 This could be the year that Massachusetts adopts legal sports betting. All signs point to a bill that almost all parties like. The question is: will legislators think sports betting is important in this coronavirus year? Senator Brendan Crighton (l.) hopes the answer is yes.

Sports-crazy Bay Staters are hoping that the Massachusetts legislature will pass a sports betting bill before the end of the year.

It could happen. State Senator Brendan Crighton, a supporter of sportsbooks, told Sports Handle, “We’ve been working on this for a few years now, and we feel like it’s been properly vetted.” He added, “All the states around us are doing it, so why are we letting the black market thrive here? I think going with a more flexible bill is the way to go. And it has a [good] consumer protection piece.”

He said the progress of such a bill was felled by the Covid-19 pandemic, and said, “I don’t know what the appetite for non-essential legislation is right now.” He added, “I would like to see it move along in the process, and it seemed like the House was ready to act on it, but until we get a handle on corona, I don’t expect it’s going to move all that quickly.”

The legislature’s formal session ends July 31. Bills can be passed during the rest of the year but most legislation is taken care of before that date.

Currently the state is an odd man out when it comes to sports betting. Rhode Island and New Hampshire have booth legalized it and Maine came close. Governor Charlie Baker is a strong supporter and several bills have been introduced.

However, legislative leaders tend to take gaming questions by a more deliberate path. It is considered complex. Rep. Ann-Margaret Ferrante, who chairs the Economic Development and Emerging Technologies, which oversees gaming issues, said last year, “It is an issue we want to be very diligent with and we want to make sure that if Massachusetts is to go forward with this, that we do it properly.”

The delays may have benefited the process, says Crighton. “One of things we have talked about it is that while it has taken a long time for us to get on board, it’s given us a chance to see what’s worked and what hasn’t.”

They have also led to several bills being folded into one, HB 4559, which allows for sportsbook anywhere in the state using mobile platform or app. It would allow remote registration. The bill has widespread support and was voted out of the committee last month and sent to the House Ways and Means Committee.

Supporters believe sports betting could pay the state $25 million annually. Crighton admits that wasn’t much when the state was running a surplus, “but now when we want to get people back to work…And when people have been starved from the sports they love, this might be welcome.”

Applicants would pay a $500,000 fee and $500,000 license fee good for five years. Three casinos qualify to apply: the two full service casino resorts in Everett and Springfield and the slots parlor in Plainville. Racetracks could apply for $50,000 and a $100,000 license fee that would only allow it to offer retail (i.e. non internet) sportsbook.

The state would tax retail sports betting at 10 percent of gross and 12 percent for mobile wagering.

Wagering would be allowed for professional sports, and Division I college sports, but banned for Division II, III, and NAIA college teams. It would also be banned for the Olympics, amateur sports, eSports and fantasy sports.

The Massachusetts Gaming Commission would be empowered to set maximum wagers.

Esports: Is This the