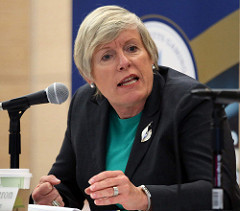 When Massachusetts Gaming Commission Chairman Stephen Crosby decided he had enough late in September, the organization was faced with a dilemma. Who would have enough independence to determine if the investigation of Wynn Resorts and Encore Boston Harbor would have credibility. While Crosby seemingly bent over backwards to be fair, he was recently deluged with letters and potential lawsuits that charged him with favoritism toward one side or another.

The commission decided who would assume Crosby’s position was answered last week when the four remaining members appointed Gayle Cameron as chairwoman. Cameron is a former deputy superintendent of the New Jersey State Police and was first appointed to the gaming commission in 2012. While in New Jersey, she was head of the State Police investigations division, which oversaw investigations at the Division of Gaming Enforcement, an arm of the State Police.

Crosby had been accused by Mohegan Gaming and Entertainment, which lost the bid to the Wynn Resorts and has filed suit to challenge alleged irregularities in the licensing process, of favoring Wynn Resorts. The name of the Massachusetts property has been changes from Wynn Boston Harbor to Encore Boston Harbor, but the Mohegans believed the fix was in.

At the same time, Crosby revealed he has received a letter from a lawyer for Steve Wynn, the former chairman and principal shareholder of Wynn Resorts, accusing him of “false and derogatory statements” to the press and of already deciding to pull the Wynn license.

Crosby said none of it was true.

“There has never been a shred of truth or accuracy to any charge of bias, favoritism, corrupt practice, ethics violations, or prejudgment in my execution of this job,” he said in his resignation letter.

The commission’s investigation of Wynn and his former company are expected to be completed shortly, and hearings should begin soon thereafter.