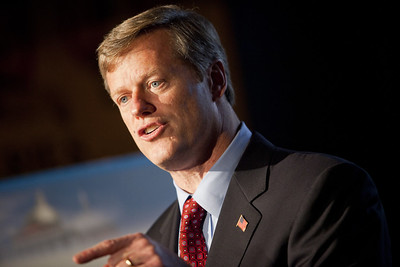 The Massachusetts legislature last week approved a bill reauthorizing horse racing and simulcast wagering for another year, to July 2021. It awaits Governor Charlie Baker’s (l.) signature to make it law.

As it’s done for several years now, the Massachusetts legislature just reauthorized horse racing and simulcast wagering for another year, even though there are no places left in the state where racing is happening.

H 4817 was passed by both chambers and sent to Governor Charlie Baker, who is expected to sign it. If he doesn’t, horse racing and simulcast racing will become illegal in the Bay State.

The bill extends the activities to July 2021. It also authorizes Suffolk Downs to continue to offer simulcast wagering, although it held its last races last month and has not announced plans to hold any again. Suffolk Downs was recently sold to a real estate developer, but has been authorized to continue to offer simulcast racing until the transition to a mixed, multi-use, retail and residential development begins.

None will be allowed to open before July 6 under Baker’s reopening plan.

Currently the only location in the state that offers live racing is Plainridge Park Casino, which hosts harness racing. It hasn’t started its season due to the Covid pandemic.

State Senator Paul Feeney, who with Rep. Tackey Chan co-sponsored the bill, commented, “As we face a looming racing & simulcasting deadline this week, I believe we should extend the date to a time-certain while we consider the modernization bill that we hope to release soon. It’s vitally important that we do everything we can, in every sector of our economy, to keep workers working and businesses open as we deal with the sudden economic downturn.”

The senator added, “I’m hopeful that we can agree to an approach that allows these businesses to continue to operate in the short-term while we consider a bill that will create stability in the long-term.”

Feeney was willing to support the extension, but opposes a series of short tern extensions and added, “as long as everyone remains committed to advancing a bill that promotes long-term security for the industry, its workers, local farms and agricultural stakeholders.”