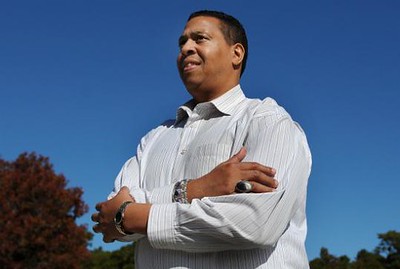 An order from Interior Secretary David Bernhardt has withdrawn the previous decision by the department to take land into trust for the Mashpee Wampanoag Tribe in Massachusetts. Tribal Chairman Cedric Cromwell (l.) calls the action “cruel and unnecessary.”

In a surprising development Secretary of the Interior David Bernhardt has ordered that the reservation set aside for the Mashpee Wampanoag Tribe in Massachusetts be “disestablished.” While the federal recognition for the tribe remains unchanged, the land-into-trust decision reverses a previous decision made by the department to take the land into trust.

“Today’s action was cruel and it was unnecessary. The Secretary is under no court order to take our land out of trust,” Tribal Chairman Cedric Cromwell wrote in a post on the tribe’s website.

A spokesman for DOI says, however, it was a court decision that spurred the action.

“In Fall 2015, Interior issued a decision approving a trust acquisition for the tribe,” said Connor Swanson according to the WBUR radio. “Subsequently, both a federal district court and a federal circuit court panel comprised of former Supreme Court Justice David Souter, former Chief Judge Sandra Lynch, and Senior Judge Kermit Lipez, found there to be no statutory authority for this decision. The tribe did not petition for a panel rehearing or a rehearing en banc. On March 19th, the court of appeals issued its mandate, which requires Interior to rescind its earlier decision. This decision does not affect the federal recognition status of the tribe, only Interior’s statutory authority to accept the land in trust. Rescission of the decision will return ownership of the property to the tribe.”

Jean-Luc Pierite, head of the North American Indian Center of Boston, emailed the tribe and called the decision an “existential crisis” not only for the Mashpees but for every other tribe recognized after 1934. He said the decision was based on the 2009 Supreme Court ruling Carcieri v. Salazar, which stated that the federal government cannot take land into trust for tribes that weren’t “under federal jurisdiction” in the year 1934.

“For the federal government, it could mean a situation in which hundreds of tribes seek reaffirmation through an act of Congress, as the Massachusetts delegation has done,” Pierite said.

Massachusetts Congressman. Bill Keating, who introduced a federal bill to give the Mashpees recognition, called the decision one of the most cruel and nonsensical acts I have seen since coming to Congress.”

Keating has co-sponsored a bill with Oklahoma Congressman Tim Cole that would clarify the Carcieri decision and ensure that this kind of “disestablishment’ does not happen again.

The Mashpees have been trying to build a casino in Taunton for many years but have been blocked at many points by lawsuits and rulings by the Interior Department. The casino was to have been funded by Malaysia’s Genting Corp., which has now written off the investment.