HomeThe ShuffleMassachusetts: Who Knew and When Did They Know It?

Massachusetts: Who Knew and When Did They Know It? 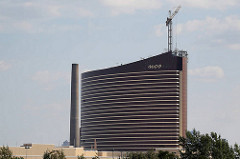 One of the key questions that investigators working for the Massachusetts Gaming Commission in their investigation of Wynn Resorts and the accusations of sexual misconduct against its founder Steve Wynn has been: How much did the company’s executives know about those accusations when the company was vying for its Boston casino license in 2014. The company is currently building the Encore Boston Harbor along the Mystic River, with the Boston skyline in the background.

In the filing Wynn recalled speaking to former board members about allegations made by a former manicurist regarding him. The board members, John Moran and “possibly” Linda Chen left the board in 2012, which is before Wynn applied to the state for a license for the Boston metro area.

Revelations about Wynn and accusations against him by company employees exploded on the scene in January of this year with the publishing of an expose by the Wall Street Journal. By February the gaming mogul was in the company’s rear view mirror, having resigned all his offices and sold all his stock.

The MGC shortly launched its own investigation to determine if it had been misled when it was not informed about a $7.5 million settlement with the manicurist. At issue is whether the company will keep the license for the $2.4 billion casino that it plans to open in June.

In the filing Wynn stoutly maintains what he has maintained since January, that any relations he had with employees was consensual.

Meanwhile, Wynn’s efforts to prevent his former company from turning over records that he argues are protected by attorney client privilege to the commission are now being weighed by a Nevada court, which has scheduled a December 12 pretrial meeting between all of the attorneys, including those of the MGC, which claims it has the rights to publish the records and that the court doesn’t have jurisdiction anyway.

Wynn sued the company and the commission, alleging that the company improperly turned over the documents as part of its investigation.

The judge issued a temporary injunction to keep the records from being released by the commission until the December 12 hearing.

With this threat hanging over its head the Encore Boston Harbor announced that it will be donating $10 million to social programs over the next four years “help those in need and improve the lives of residents in local communities.”

Of course, the casino won’t be able to donate that money if it isn’t in business, something that is left unsaid.

Wynn Resorts will partner with Connors Family Office to set up a committee to identify programs that help at-risk youth, help enrich the culture and support “vibrant communities.”

Wynn Resorts CEO Matt Maddox, the CEO from a much younger generation than the disgraced founder, issued this statement: It’s not in our corporate DNA to just write a check for a donation or buy a table at a charity event.” He added, “We want to make an impactful difference in the lives of people and effect real and positive changes in our communities.”

Kerrigan said she doesn’t skate much since she retired, mainly because of back injuries that were caused over the years by too many falls.

MGM President Mike Mathis noted that the opening of the rink was the beginning of the casino’s first Christmas. He told the Republican, “When we came out from Las Vegas we knew we had something special with all these buildings and beautiful downtown,” he said.

Mayor Domenic Sarno, a strong supporter of the casino from the beginning, thanked MGM for fulfilling its promise to build a skating rink, something he said he dreamed about having in the downtown.

Kerrigan also thanked Mathis for helping to transform the downtown area. “It is a great honor to be a part of something new. We come to Springfield every year and you transformed it,” she said.

In a related development security officers of the casino will vote on union representative soon. There are about 200 officers who could vote to join the Law Enforcement Officers Security Union. They include former cops, correctional offices and military veterans. They say they are being paid less hourly than they were initially promised.

One of them told the Republican “There were a lot of things told to us that MGM never fulfilled so we decided to exercise our rights.” He added, “We were told that we were going to be making $18. We were told that if we were trainers, we would receive an extra dollar an hour.” With that understanding many of them took extra classes and became certified in offering training to others.

Another security officer stated, “Basically, we were promised money that we never got. Since day one that we started working there, we have been inquiring about the raise.”

MGM did not comment on the specific complaints but reaffirmed that it supported the rights of workers to unionize.