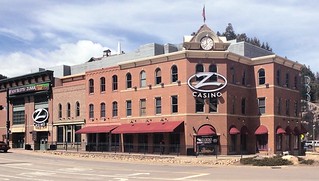 Empire-building CEO Eric Persson and a partner started Maverick Gaming less than two years ago. Maverick Gaming is in the middle of a purchasing spree that now has the company owning casinos in three states. It just entered the field in Colorado, home of the Z Casino in Black Hawk (l.).

Nevada-based Maverick Gaming has announced that it has purchased Colorado-based CC Gaming, with assets that include the Z Casino in Black Hawk; the Grand Z Casino Hotel in Central City; Johnny Z’s Casino in Central City; and the Z Stop Convenience Store and Gas in Golden for an undisclosed price. Between them, the properties have 1,500 slots, 20 gaming tables and 119 hotel rooms.

The Colorado Division of Gaming, whose regulatory nod is required, will take up the purchases at its November meeting.

Maverick CEO Eric Persson, who is also the majority owner of the company, has been very active in purchasing properties the last year. He told CDC Gaming Reports the Colorado acquisition “puts us in position to become a significant player in the Colorado gaming market.”

He added, “Given Denver’s growing population of nearly 3 million people, limited gaming distribution, and a thriving economy, we believe we can add value to the Denver gaming market, which we intend to invest in as owner-operators.”

Regarding the Washington purchases, Persson said, “With our growing footprint in Washington, we are very excited to be making this substantial investment in Washington and adding these properties to our portfolio. Additionally, we are actively looking to construct new projects in Everett, SeaTac and the Tri Cities area.

“These projects are likely to include hotel rooms, a nationally known sports bar, 50,000 square feet of convention space and our table game amenities. Our expansion plans will create even more employment opportunities to Washingtonians.”

He added, “As a member of the Shoalwater Bay Indian Nation, I look forward to working with my tribal brothers and statewide decision makers to bring this amenity that is so strongly desired by Washingtonians.”

Persson, who founded Maverick Gaming two years ago with Justin Beltram, said he intends to fund the purchase with cash on hand and financing from a private investment firm.