HomePost TimeMayweather-McGregor a KO for Bookies

Mayweather-McGregor a KO for Bookies 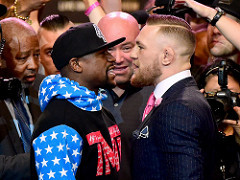 Floyd Mayweather and Conor McGregor weren’t the only ones who scored big paydays from last month’s deliriously hyped matchup in Las Vegas.

“It was the biggest boxing win we’ve ever had at Caesars Palace,” Caesars Palace sports book director Frank Kunovic said. “We won over seven figures.”

Jay Rood, sports book director in Vegas for MGM Resorts International, which hosted the August 26 bout at the T-Mobile Arena on the Strip, said Mayweather’s 10th-round technical knockout of the UFC champion was one of the top one or two boxing results the company has ever had. He said his books won “in the neighborhood” of $1 million.

“It was a great night,” said Rood, who needed Mayweather to prevail despite taking two $1 million wagers on the champ at Bellagio and The Mirage.

In all, more than $85 million was wagered on the fight, which pitted the 40-year-old Mayweather, who came in 49-0 but hadn’t fought in almost two years, against a brawler from Ireland who’d never competed in a ring governed by the rules of boxing. The books closed with the odds, and most of the money, solidly in Mayweather’s corner, not surprisingly. But more than 90 percent of bets were on McGregor, who inspired hordes of hopefuls to dream of cashing in on what would have been the upset of the century.

“We did great, like most of the town,” said Matthew Holt, vice president of CG Technology.

At least six wagers of $1 million were placed, including the Bellagio and Mirage bets: a $1.2 million wager at William Hill, two $1 million bets at Wynn and a $1 million bet at the South Point.

Even Mayweather tried to get in on the action. An ESPN report said the Las Vegas-based boxer, who also co-promoted the match and claimed to be banking around $300 million from it, entered the sports book at the M Resort on the Strip just hours before the fight looking to place $400,000 on the over/under of 9.5 rounds at minus-200 odds.

But he left without placing the bet, and wasn’t happy about it either, according to the report, because while there is no regulation in Nevada preventing a boxer from betting on himself, there were concerns over the legality of one betting on anything other than a straight win.

The frenzy also was in evidence abroad, where in the UK bookies took in roughly five times as much money as was bet on Mayweather’s 2015 fight against Manny Pacquiao, according to figures compiled by Bet-Bonuscode.co.uk.

They paid out an estimated £50 million on the champ, but that was fine with them. A McGregor victory would have banged them for around £250 million.