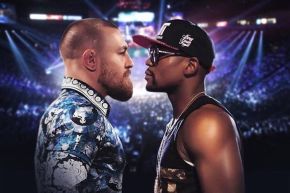 Floyd Mayweather-Conor McGregor is not simply a super summit of finance. Not just a unique coupling of the hottest stars of boxing and mixed martial arts.

It’s a tribute to marketing genius and a reflection of social spheres.

They will battle in a 12-round boxing event Aug. 26 at T-Mobile Arena in Las Vegas. I will be there, broadcasting the worldwide feed to more than 100 countries alongside Sugar Ray Leonard, Brian Kenny and others.

It’s hardly a gathering I could have envisioned when calling Mayweather’s amateur fights in 1996, or his early professional matchups in Grand Rapids, Michigan, in 1997. Yes, there was a time when he was a shy kid, not a headliner and an unlikely source of “money.”

When Mayweather collects north of $200 million and McGregor perhaps at least $50 million, it reflects their nonstop customer engagement.

Mayweather is the promoter of the event. UFC President Dana White, an architect of promotion himself, kept the rivalry at center stage. The brain trust established the idea of Showtime announcer Paulie Malignaggi, a retired two-division boxing champion, to spar with McGregor. Malignaggi initially blessed McGregor’s skills and then launched a tirade after a leaked video appeared to show him being knocked down. Malignaggi wanted the whole sparring session released. White unfurled some language we can’t repeat, even in this age of nearly-everything goes.

And the cash register sounded.

This will probably break the record for pay-per-view buys of 4.6 million for Mayweather-Manny Pacquiao in 2015.

This will probably set revenue records for ringside handle.

McGregor is the darling of the 20-30 something set, a hard-punching Irish star who owns the MMA record for a 13-second knockout in a title fight. He even landed the shot while backing up. McGregor’s supporters want to see him bust up one of the greatest defensive fighters of all time. Mayweather has different kinds of records, like opponents only landing 19 percent of their punches against him, over several years.

MMA fans will account for most of the pay-per-view buys and the fact that odds remained at an astonishingly low 5-1 throughout much of the pre-fight period. As long as McGregor tries, his fans will be happy.

Boxing observers believe McGregor should not have even come to Las Vegas unless he was going to WATCH a fight. How will he succeed when famed punchers like Pacquiao and Canelo Alvarez could not lay a glove on Mayweather? They see McGregor being frustrated, embarrassed and stopped.

The pragmatists have also weighed in. Gavin and Joe Maloof, the prominent Las Vegas brothers who sold the Sacramento Kings in 2013 for $534 million, made the largest confirmed bet on Mayweather, $880,000, in early August.

They will donate the proceeds, $160,000 if successful, to various Las Vegas charities. The Maloofs also did the sports books a favor, helping to balance the action. For every one bet on Mayweather at the MGM Sportsbook, there were 27 on McGregor.

This event swept up the public. It hardly matters what happens, just that it does happen.